This flight was a bit strange.  I had no plans of actually taking this flight until the day prior. Due to last minute cancellations I booked a trip from Mumbai to New York City via London on Virgin Atlantic business class. The flight was set to depart at 3:00am, which in India is apparently common for flights to leave in the middle of the night.

I had never flown Virgin Atlantic business class before, and was pretty excited to check it out. There wasn’t time to do much research prior so I had no idea what to expect.

I typically like to pre-order the vegetarian meal prior to departure, but since I booked so last minute that wasn’t an option. I crossed my fingers hoping that Virgin Atlantic would have a vegetarian option. 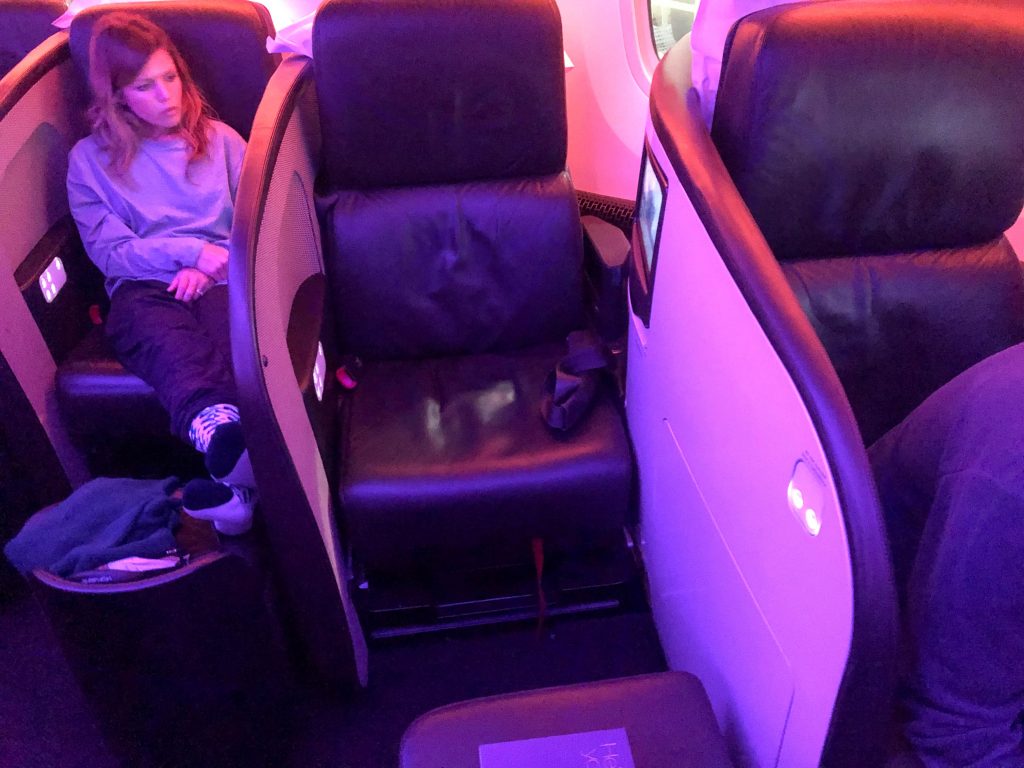 I boarded the plan and found a very unique cabin layout that had me sitting in the middle of a row with a strange barrier in front. 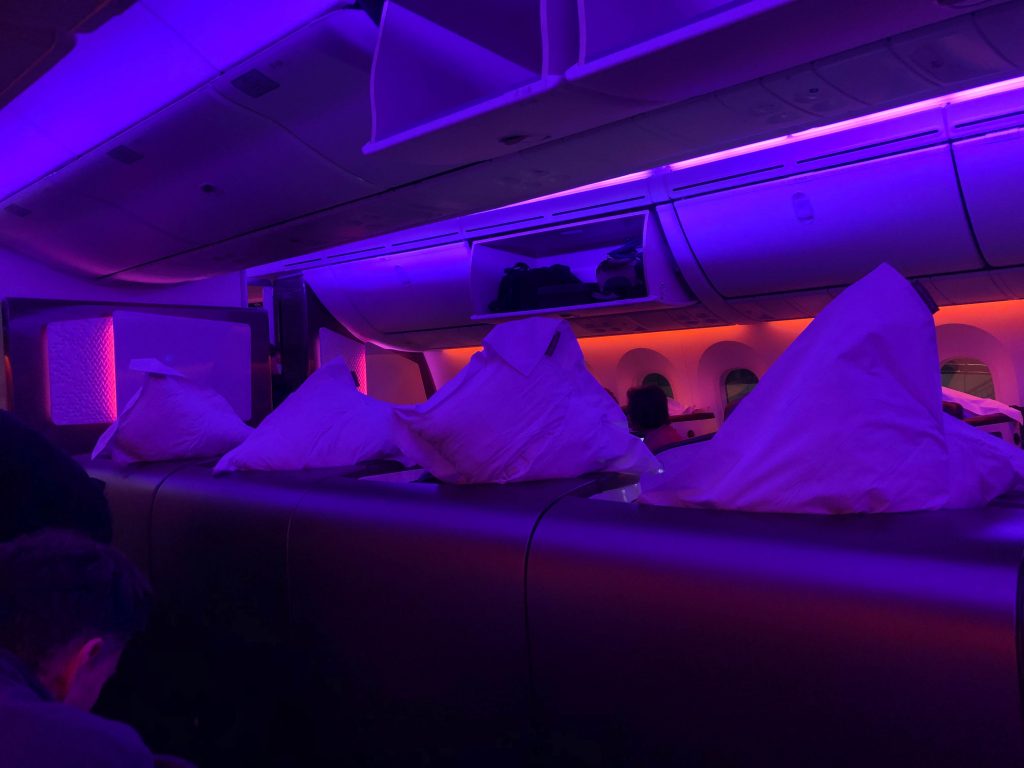 This would be my view for this 9 hour flight. I had seen pictures of the layout before, but didn’t really know what to expect when I was flying it. I was just glad I was on this side of the aisle and not in one of those seats that appear to face each other. That would be totally awkward.

My first immediate impression of the cabin was how sleek the lighting was. It felt like I was in some sort of trendy lounge. Very much Virgin Atlantic’s aesthetic.

The seats, however, while a little narrow. I felt just a little bit too close to your neighbor. You don’t even need to be tall for your head to be right next to your neighbor, and any small move could result in awkward eye contact. If you are looking for any sort of cabin privacy this flight definitely wasn’t the right flight. 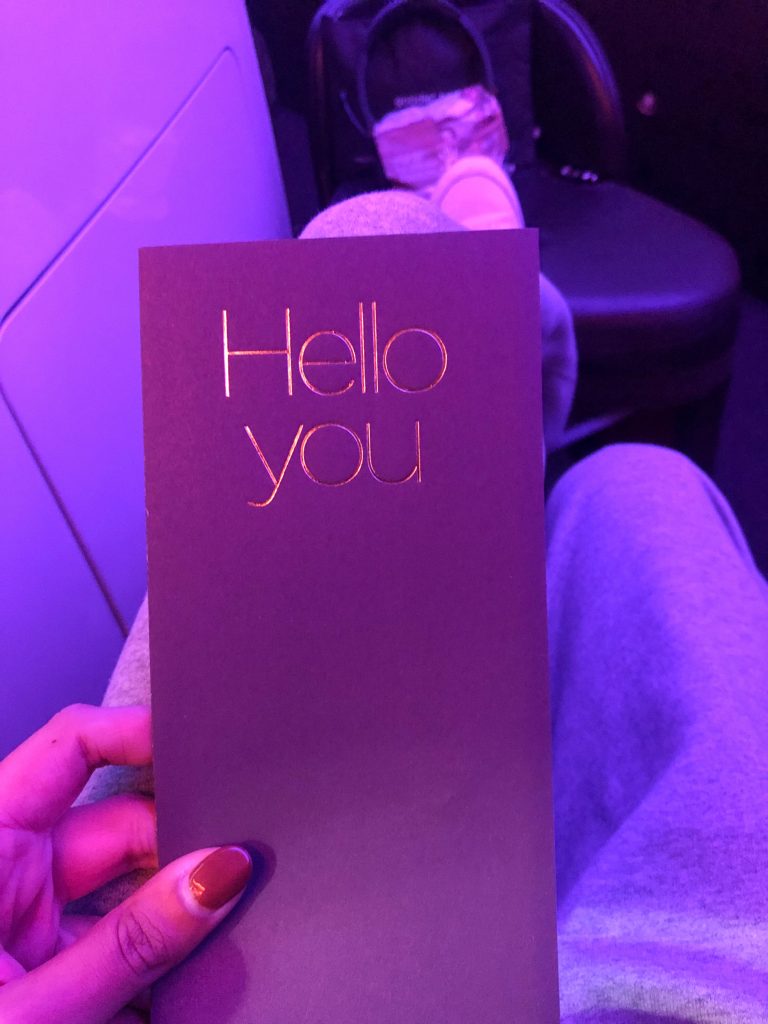 Virgin’s laid back and cool vibe was on display all throughout the flight. Even their menu greeting seemed on trend. 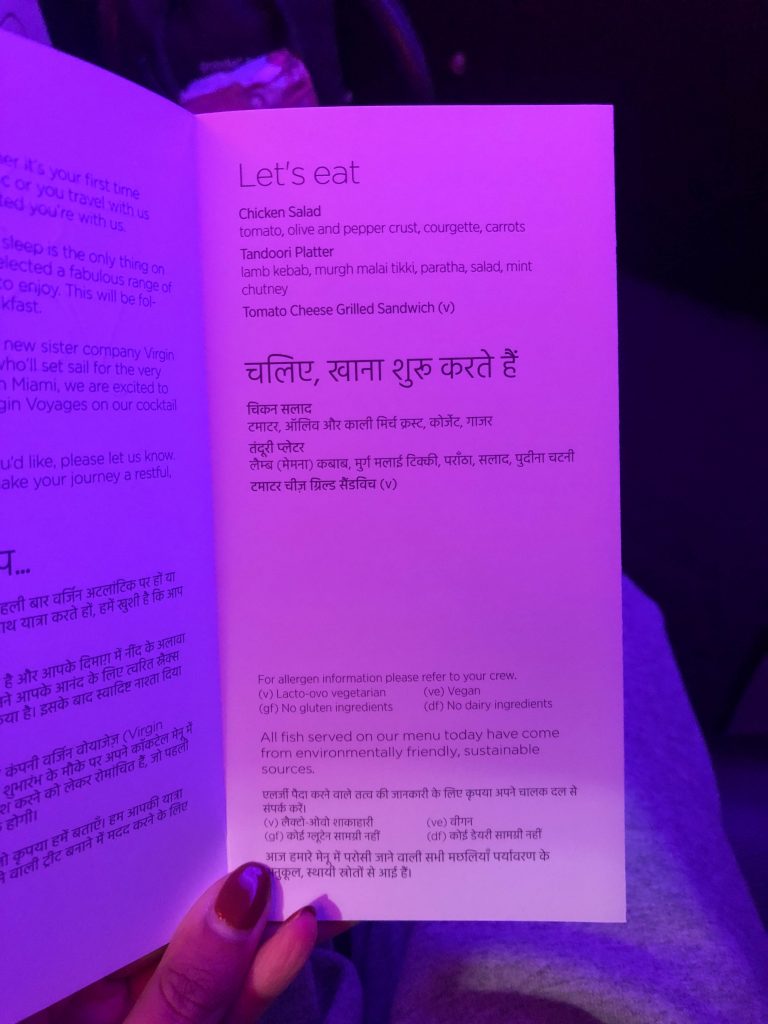 I was excited to open it up and see a grilled cheese! While the vegetarian options were slim, I was still relieved that I’d have something to eat. 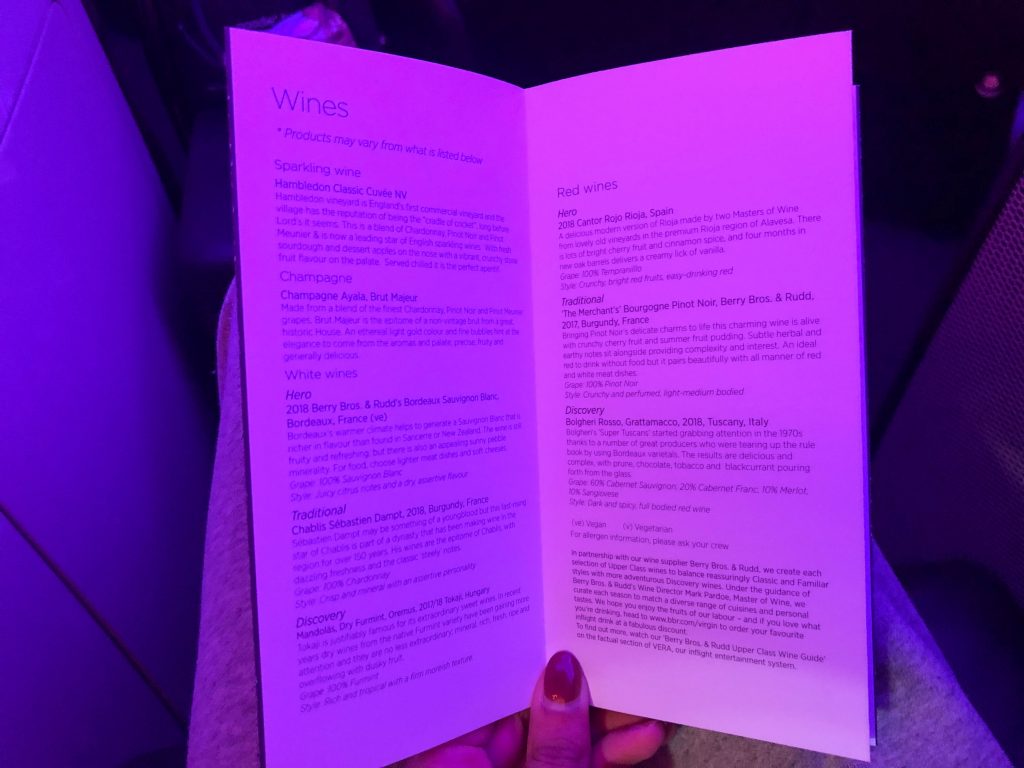 A decent amount of wine

I’m not much of a drinker, but I did take a peek at the wine list. If I would have ordered, I would have picked the Champagne Ayala Brut Majer, which retails for around $40 a bottle.

As we took off I was excited to get something to eat before getting some shut eye.

When the grilled cheese arrived it looked a bit underwhelming. It was served on a sleek black plate, but the dish didn’t come with anything else, just the grilled cheese. A pretty meager portion, but I was too hungry to care at this point and easily finished off all four quarters.

Before I went to bed I checked the breakfast menu just to make sure there would be another vegetarian option. 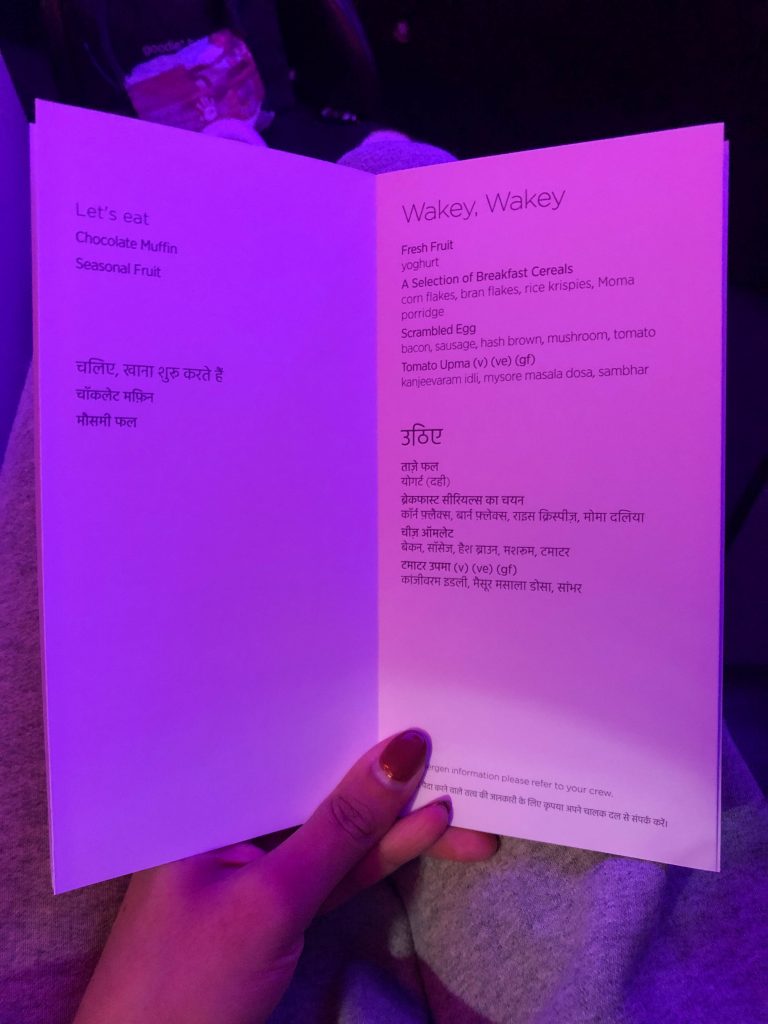 They had a simple, yet restrictive menu but I could always spring for a bowl of breakfast cereal.

I ended up getting way more sleep than I expected. After 2 weeks in India I was super tired out and slept just about the whole way since finishing the grilled cheese.

The downside was that I didn’t wake up in time to get breakfast. But I did catch up on some much needed zzz’s…

While I was bummed at first, I realized I that I would be spending a few hours in the Virgin Clubhouse at Heathrow between flights and have plenty of food options there.

My first premium experience on Virgin went smoothly, although I don’t know if I would pick it again with other options available and such a limited food menu. My flight on the way in United Polaris via Frankfurt provided a much bigger seat and had way more privacy and a larger food selection.

I would compare Virgin Atlantic to a trendy nightclub in the sky that has a lot of style, but can sometimes fall short on comfort. I was hoping the newer plane I was on from London to New York would be more my speed but if it was this or Air India, I would go with Virgin Atlantic every time.

About the Author: Rohan

Rohan Lala is the founder of Kitchen Season. A self described weekend chef, his interest in cooking led him to sharing recommendations about the best kitchen products on the market.

A platform designed to highlight
all aspects of the modern kitchen.