Let me start by saying that the Changi Airport in Singapore is simply incredible. And not just in the spectrum of airports, just generally an incredible place to visit.

One of the largest passenger hubs in Asia, Changi airport in Singapore is so beautiful that Skytrax has named it the best airport in the world for 7 years in a row.

The airport boasts everything from world class shopping, restaurants, a movie theater, and even a swimming pool! When was the last time you heard of an airport that you can spend days in without getting bored?

The main attraction of the airport. The Jewel.

The Jewel is a central waterfall in Terminal 1 that has an expansive garden, fun attractions, retail shopping, dining, a hotel and facilities to support all airport operations.

After cruising through the airport for a while I was excited to reach Singapore Airlines Silver Lounge, which serves Business and First Class passengers.

I was set on doing things a bit different this time. I planned to stop in the lounge on my arrival rather than departure. I landed in Singapore after flying an A380 from Mumbai and was starting a 16 hour lay over early in the morning, which gave me a full day to explore. So I guess you can say I was still in departure mode, which is how I was approved to head into the lounge.

My next flight would be an A350 to Newark, the longest flight in the world. I was excited for everything I can do in a day and tried to make the most of it.

I landed in terminal 3 and saw signs for the Singapore lounge. As I tried to find it I got a bit lost, and this wasn’t even in a major part of this huge airport. I was in awe of the sheer size of operations of this place.

I took a hunch going up an escalator to what seemed like a quieter second floor of the terminal, and lucky enough I found the lounge.

While I was only planning to shower in the lounge and head out to explore, I couldn’t help but take a peak at the food options. 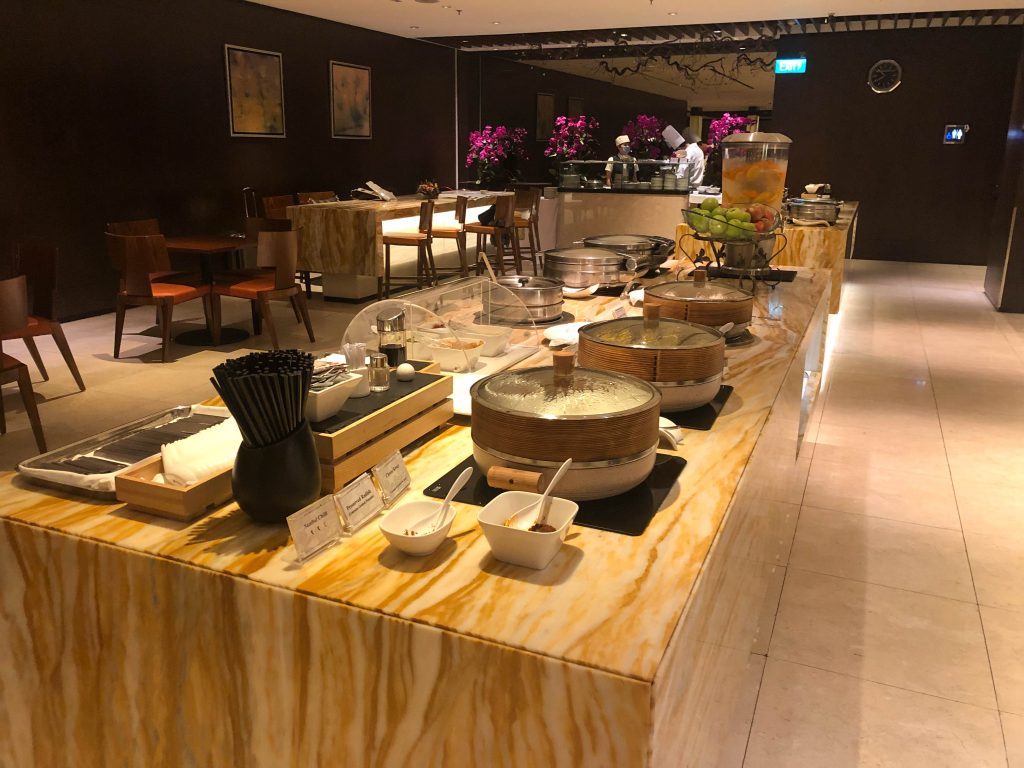 It was breakfast time so I was pretty interested to see how they start the day. Most lounges, especially in Asia, offer both local and western food options. In this case I was more interested in browsing the Asian options. 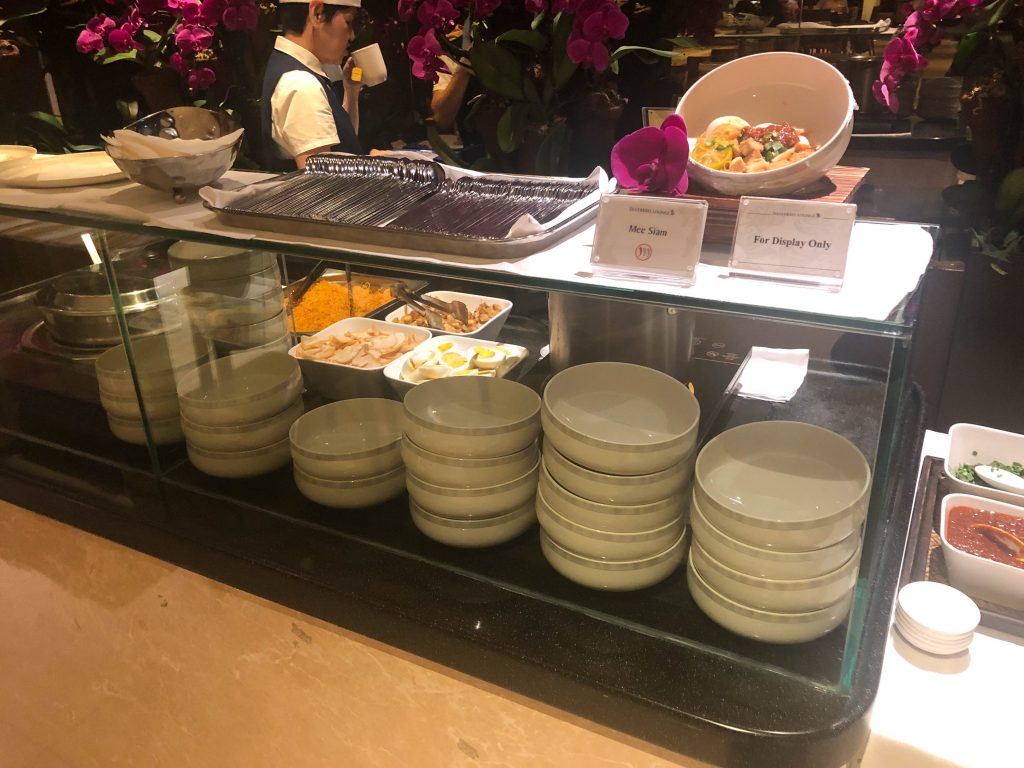 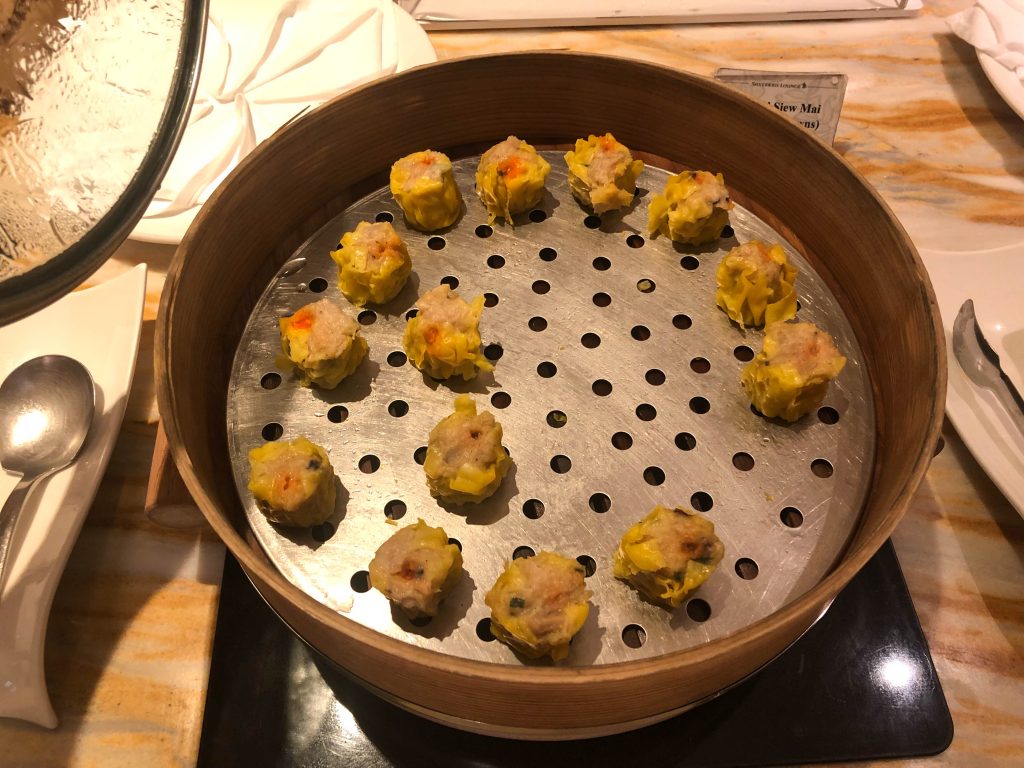 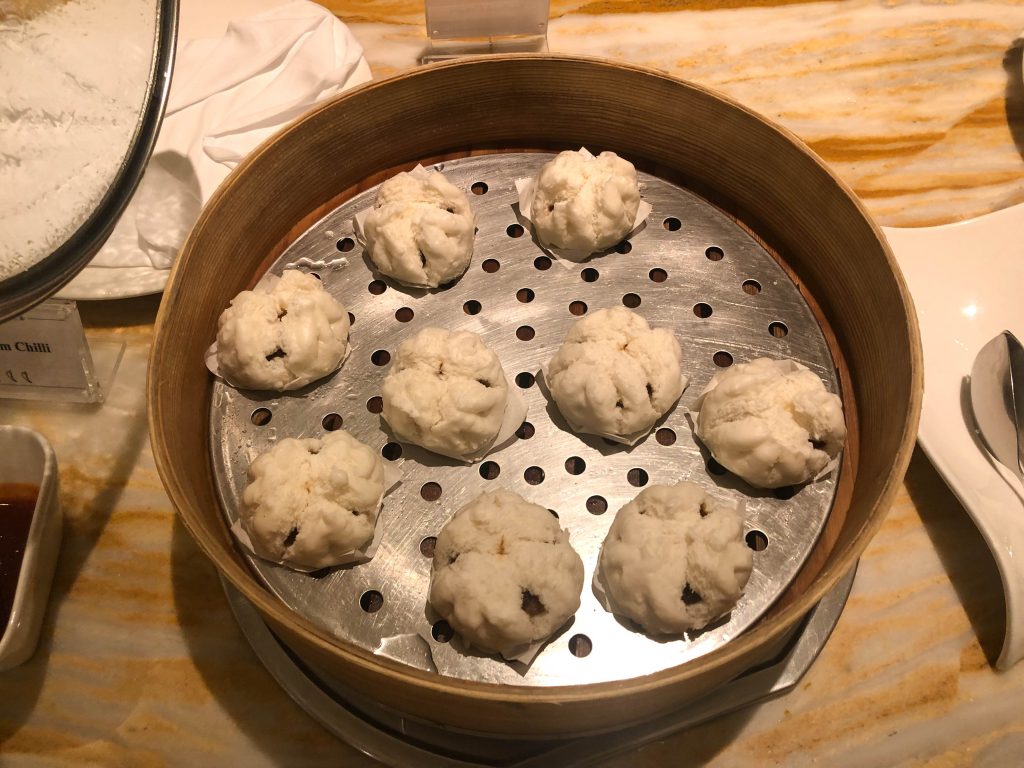 They also served selection of barbecue pork buns, which in my opinion one of the best of the dim sum offerings. 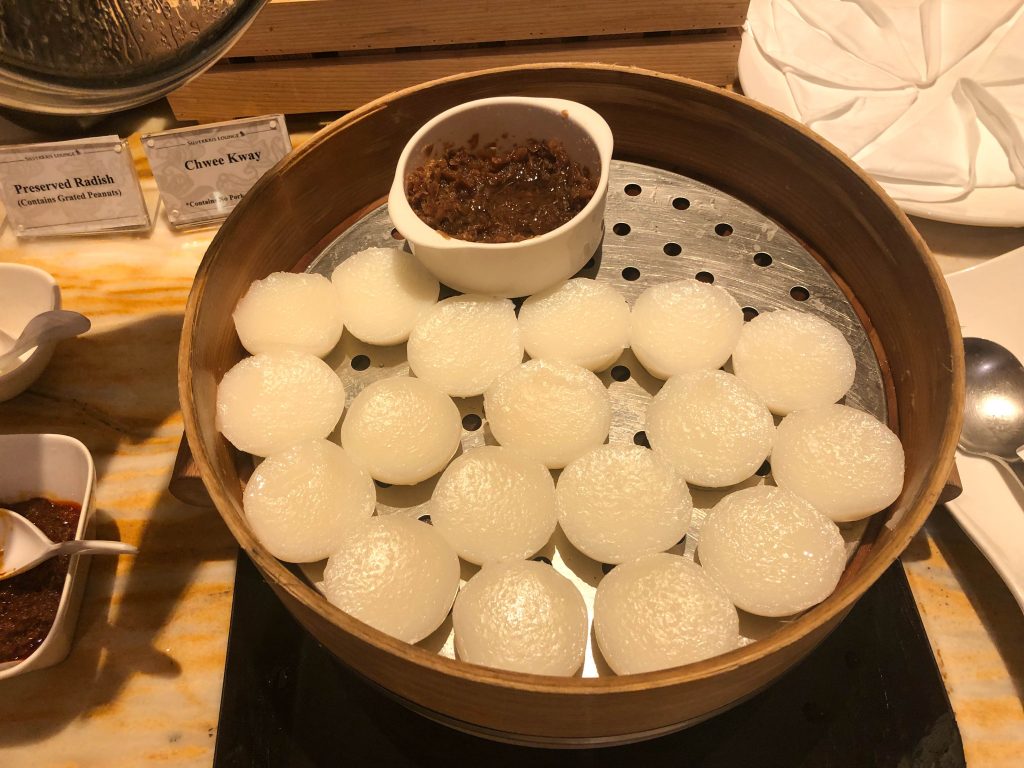 A dish called Chwee Kway, which tasted like a rice cake. I topped it with one of the sauces on display outside this tray which turned out to be very fishy. 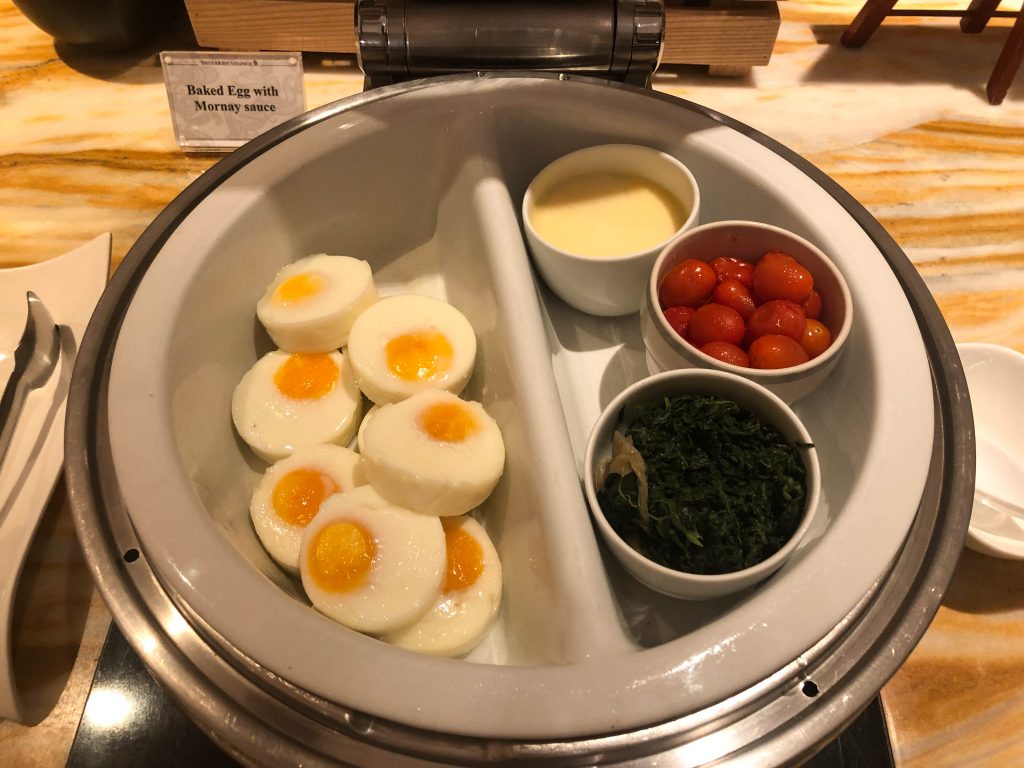 Some of the western options included baked eggs and some roasted veggies. While I would usually stay away from prepared eggs like this, these actually smelled pretty good. 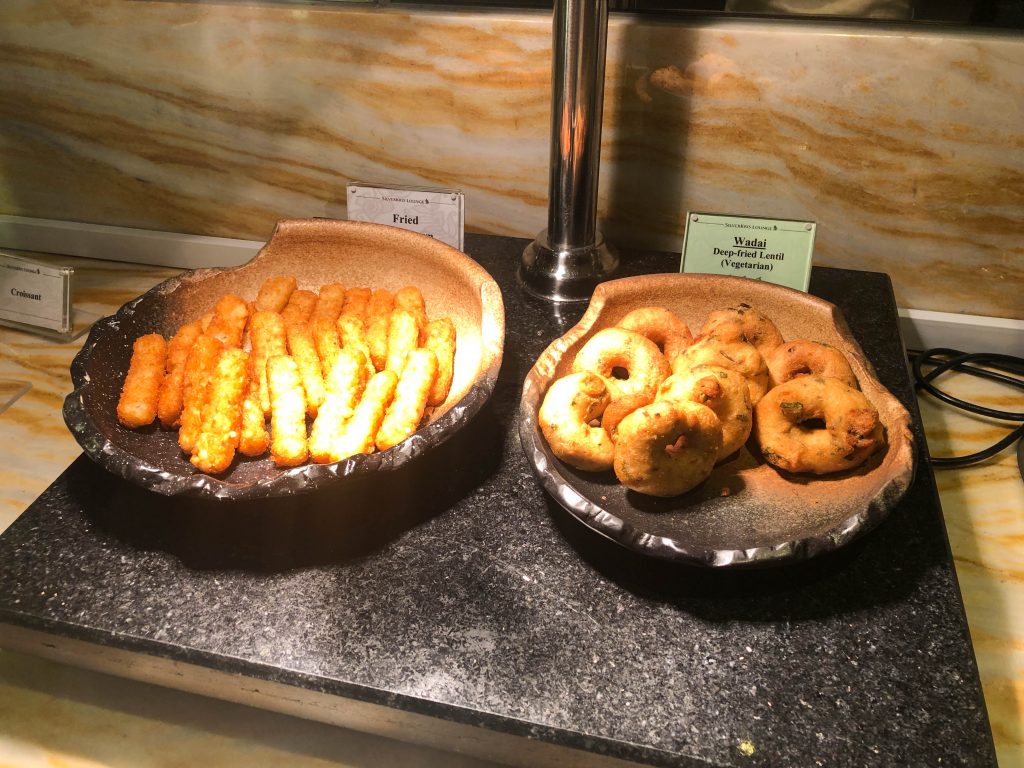 I also liked how they made potatoes two ways. One cooked western style like hash browns and other wadai, an indian style. 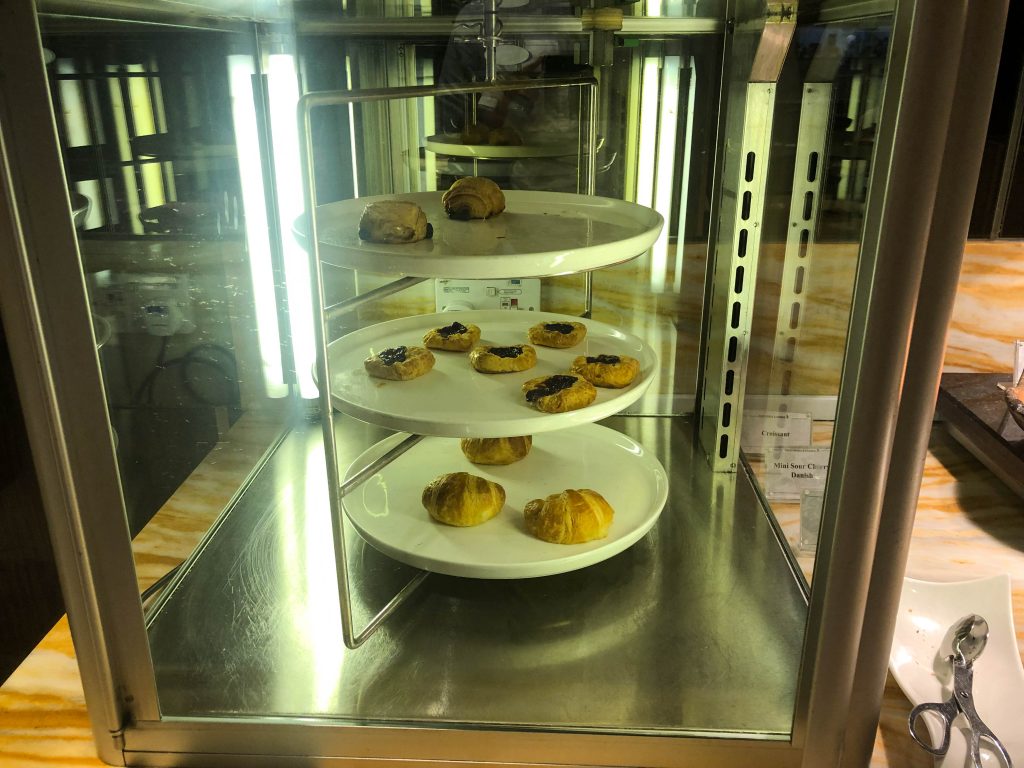 I found it kind of funny how they displayed their dessert pastry case. Rotating like you would find in an old school dinner.

I turned over one of the plates to see who made it. Interesting that Singapore Airlines was able to keep the brand off or even had these made especially for them. 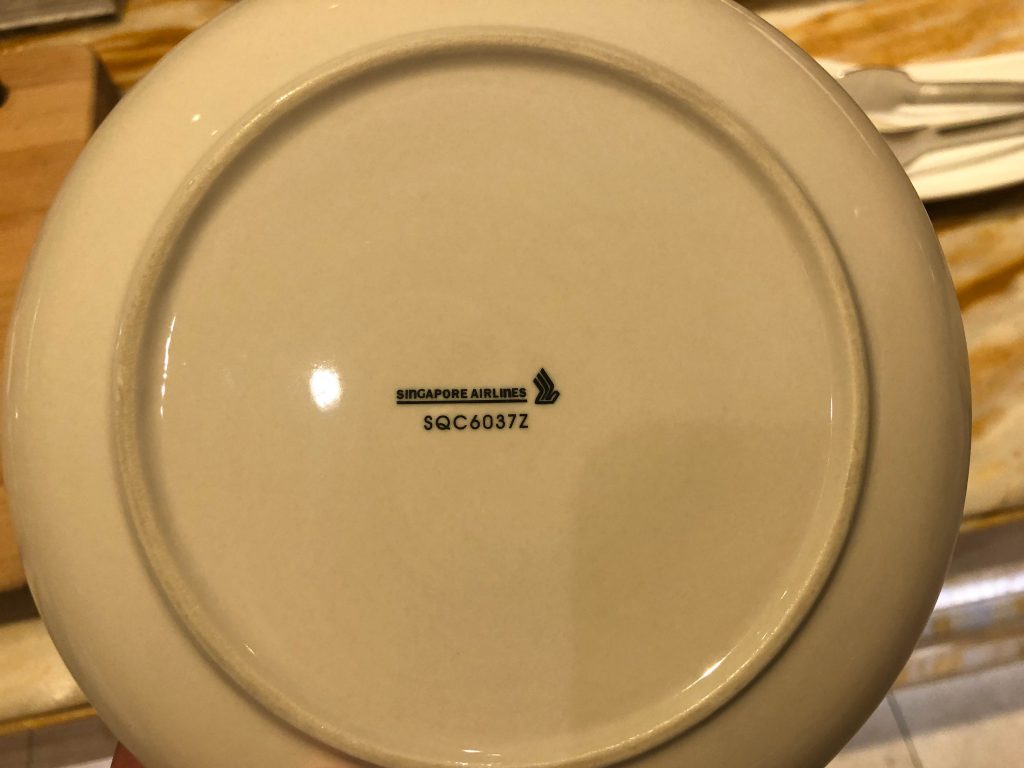 What I really liked about Changi airport in Singapore lounge and their airline in general is how they derive their cuisine from many regions nearby.

But this lounge in particular I found to be just ok. It had a decent selection of food, shower, and plenty of space but it didn’t really have much of a wow factor. Singapore Airlines has been ranked by Forbes as the world’s best airline I thought the business lounge would be a bit better.

Maybe I was in a bad one or this wasn’t the main terminal? I didn’t mind either way. For me a lounge serves as a utility to pass time until your flight and offers a place to freshen up. I got both here and would happily visit this one again.

About the Author: Rohan

Rohan Lala is the founder of Kitchen Season. A self described weekend chef, his interest in cooking led him to sharing recommendations about the best kitchen products on the market.

A platform designed to highlight
all aspects of the modern kitchen.