Singapore airlines is unquestionably one of the top airlines in the world. In fact, Forbes recently named it the top rated airline of 2019

They consistently rank high in customer service and food quality, and have been continuing to invest in newer airplanes with more luxurious accommodations year after year.

To say I was excited about my flight on Singapore Airlines A380 was an understatement.

It was not only my first time flying Singapore Airlines, but in business class in general. I was confirmed for a 6 hour flight set to take off at 11:30pm from Mumbai Airport and arriving at Singapore Changi at 7:00 the next morning.

As always, the food was my most anticipated part of the flight, and I had heard that the experience aboard Singapore Airlines A380 was even better than the reputation suggested. 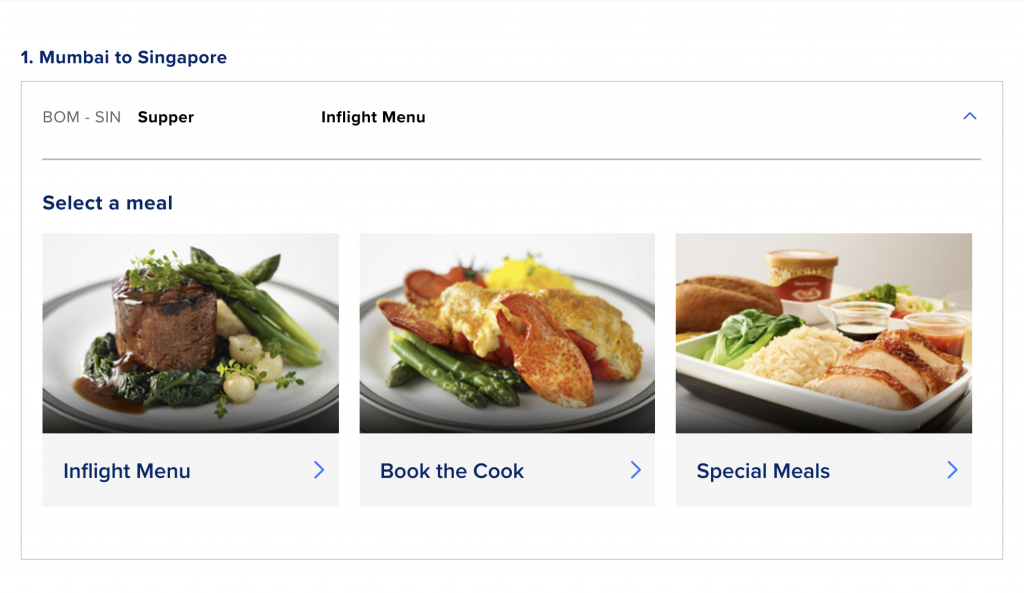 A menu with a ton of options!

Singapore offers the option to pre-select meals like many carriers, but has a cool program called “Book The Cook”. Offering a huge menu of special meals, the airline will prepare just about anything for you and have it brought onboard. While I didn’t select that option for this flight, you can read where I selected it in a food review of the A350 Business Class on the longest flight in the world from Singapore to Newark.

After making a quick stop in the GVK lounge at Mumbai Airport, I was off to board my flight as early as they would let me. What I soon came to realize is this would be no regular flight, not even for Singapore Airlines standard.

My flight was departing during a unique time in travel history. The recent outbreak of the COVID-19 virus had grounded most flights throughout the world, but this trip was set to take off just as the outbreak was officially deemed a pandemic, leaving many travelers scrambling to return home. With reduced flight frequency I assumed more people would be on board, but what I saw was the opposite.

The flight was nearly empty.

Not just a few seats empty, but 95% of seats vacant empty. This would be a surreal experience onboard any aircraft, but I was flying an A380, the largest commercial plane in existence and had almost the entire upper deck of business class to myself. 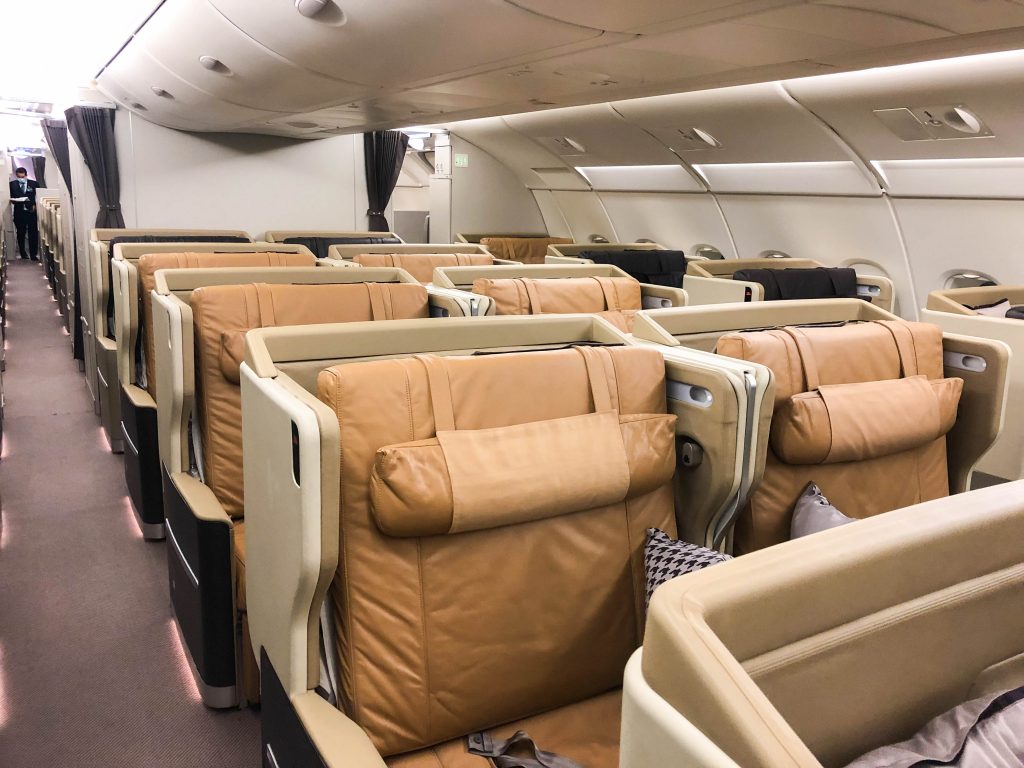 While this was the older Singapore airlines A380 model, the seats still offered more space than on any other airline that I’ve flown on. 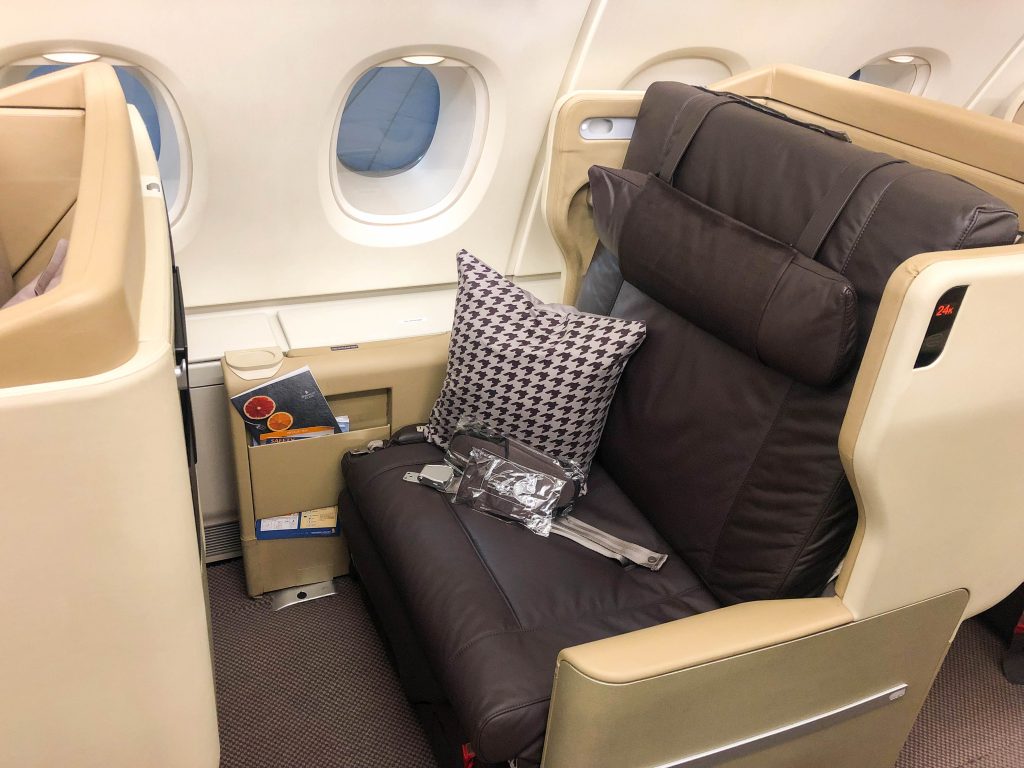 Seats offered a ton of space

Seat 24k was mine for this journey. But with such a high level of vacancy, the flight attendants were happy to let me sit here for meals before making me a separate bed in an other open seat.

The flight took off just before midnight and as soon as we were airborne the crew came around with welcome drinks and nuts. 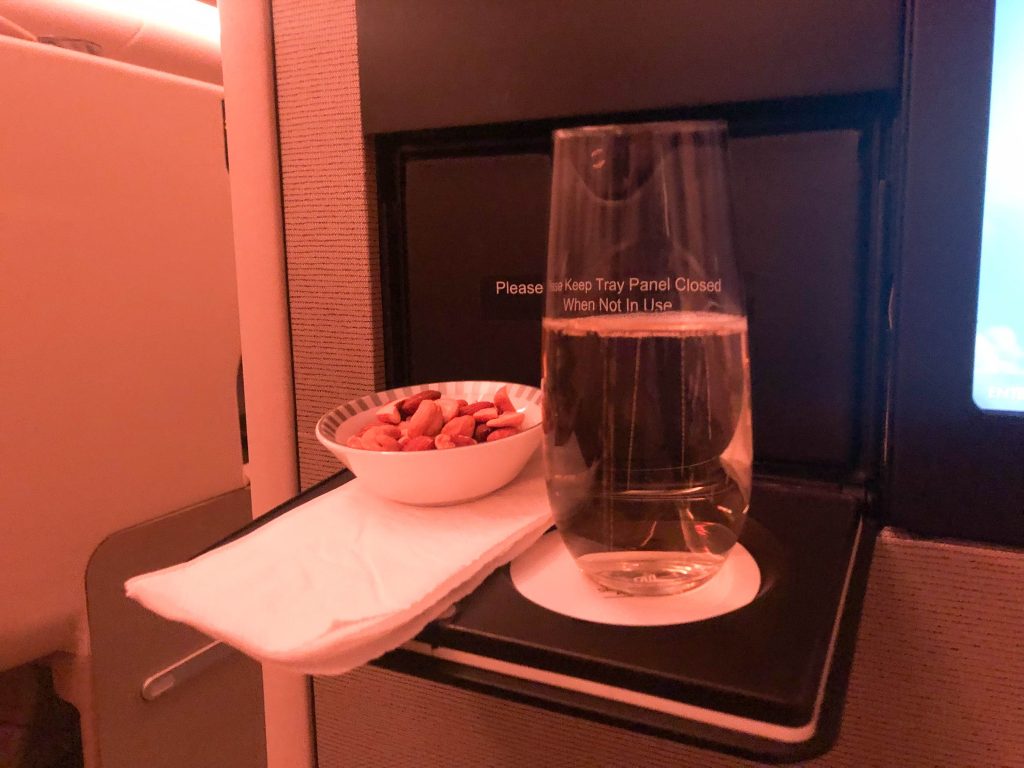 I selected a glass of Laurent-Perrier La Cuvee Brut, which retails around $40 for a bottle. It was served with warmed mixed nuts which are always a nice touch.

I took a peak at the menu and the first page showcased the inflight special. An Indian Thali. 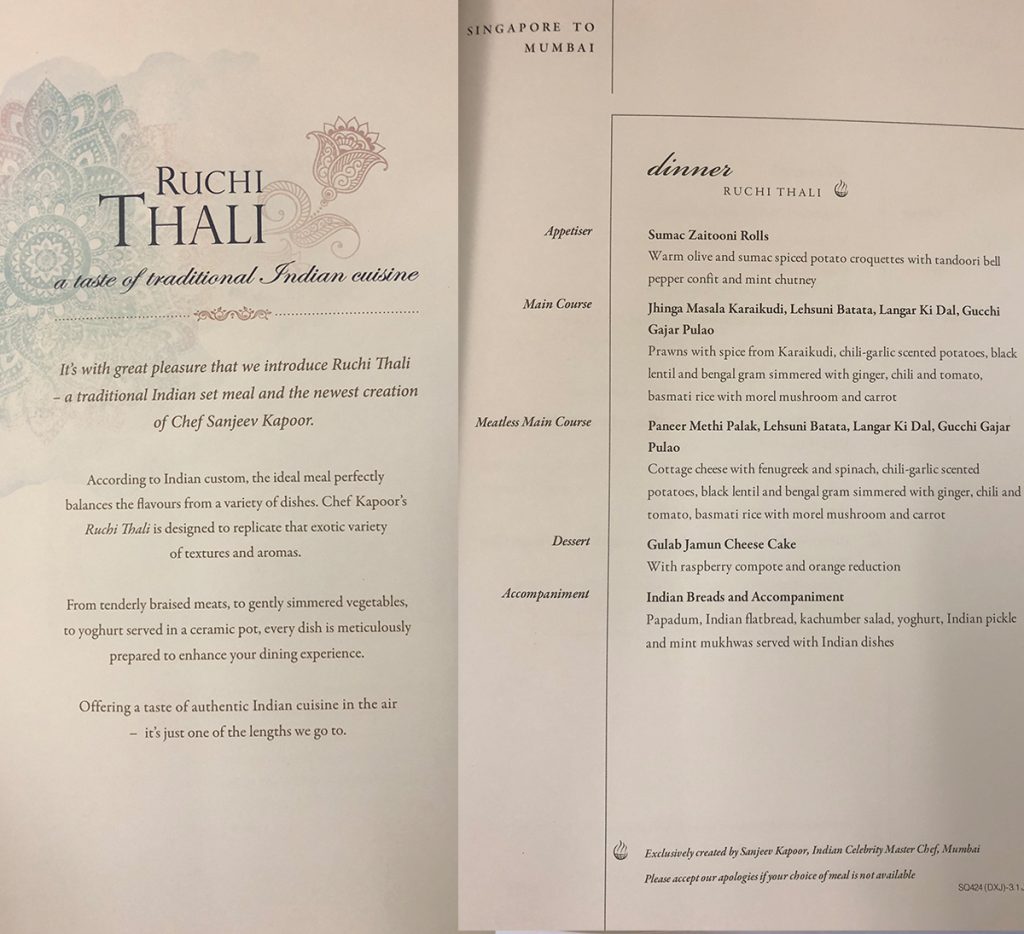 If you’ve never had an Indian Thali before, it’s kind of like a version of Mezze, or a collection of small dishes served on a big, round plate. This dish originated in Southern India and is an awesome way to sample multiple dishes and to really get the flavors that a chef wants to put out.

I excitedly ordered this and couldn’t wait to see how Singapore airlines take on this classic.

The meal started with an appetizer, but I couldn’t really tell what was on my plate. 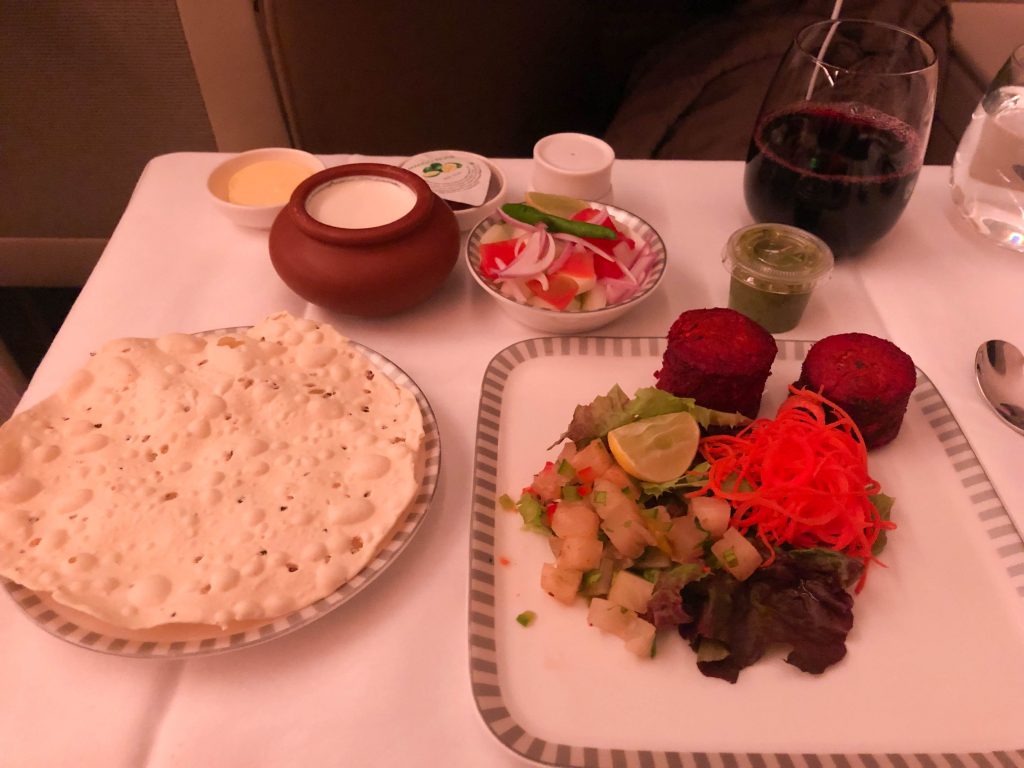 What arrived certainly was presented well, but I had to flip through the menu again to see what was what. 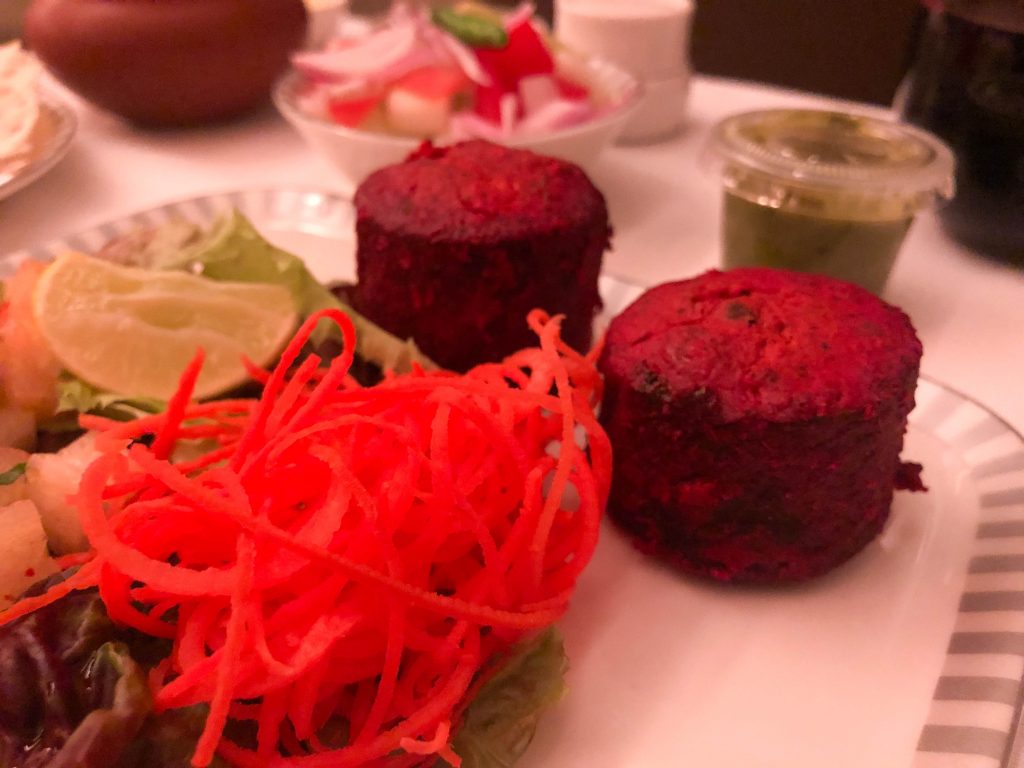 This appeared to be the potato croquette. I prodded it with my fork and it was a little hard, but I figured that maybe it was just how it was supposed to be prepared? 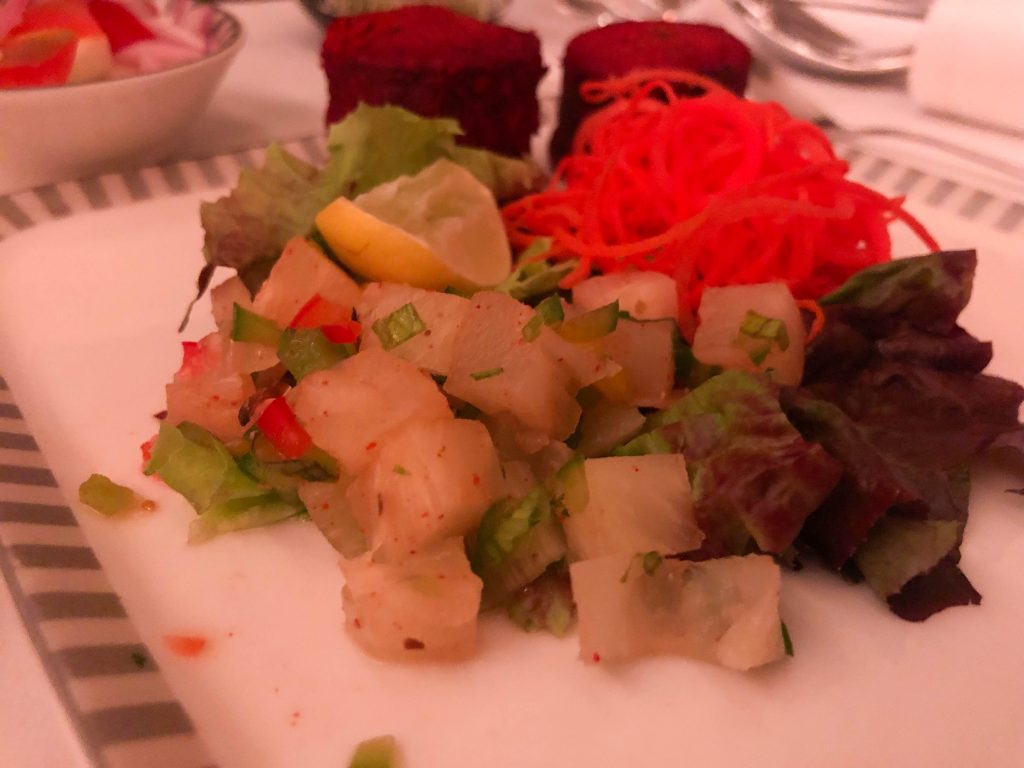 This looked more like potatoes under the dark lighting, but tasted like pickled peppers. It wasn’t overly vinegary tasting, and was quite refreshing. 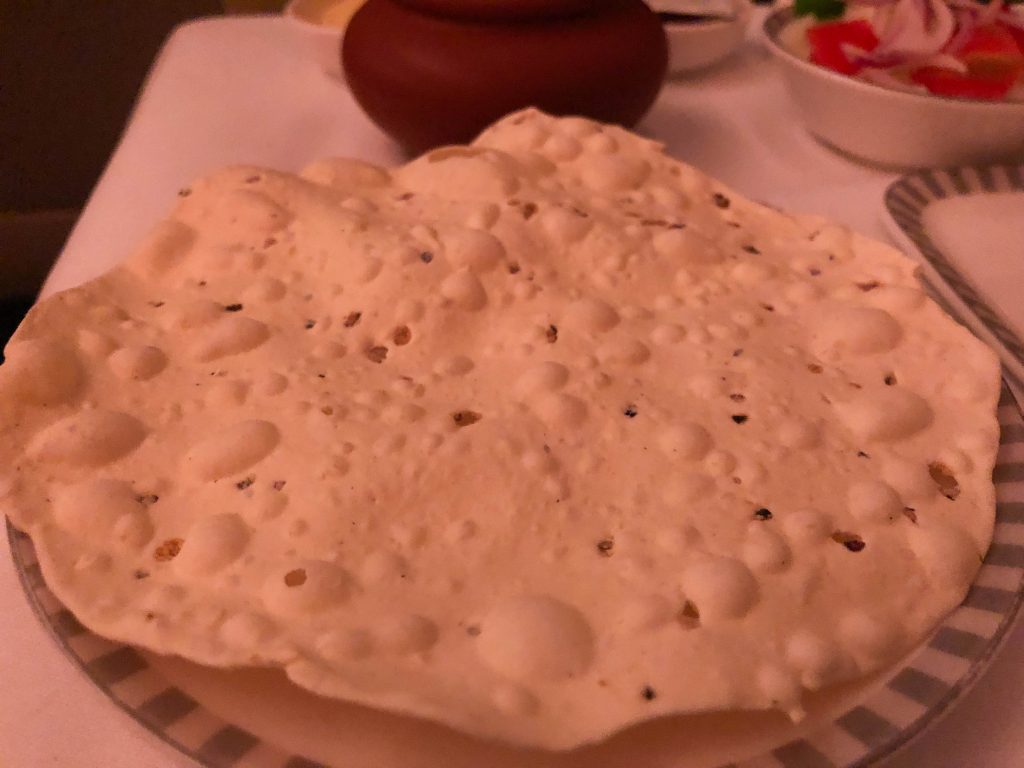 Instead of a thick bread they served papadum, which is a thin, crisp, round flatbread, but much lighter than you can imagine. 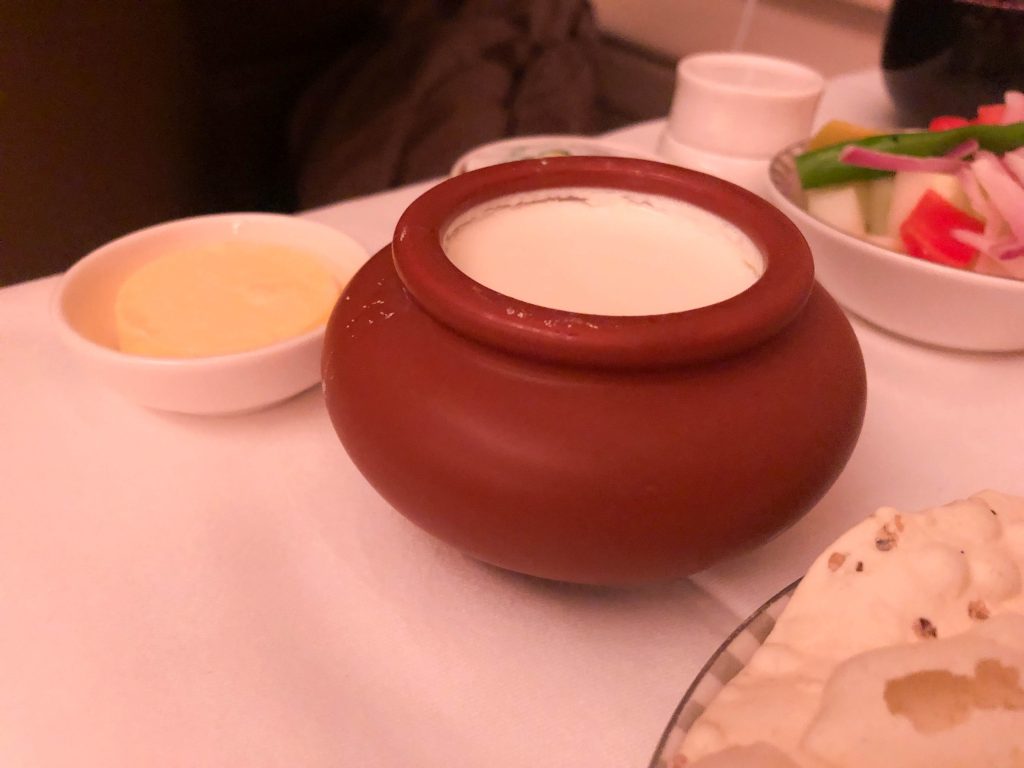 They also served yogurt in this really cool looking dish. The way it was presented made my meal feel even more authentic and legitimate. 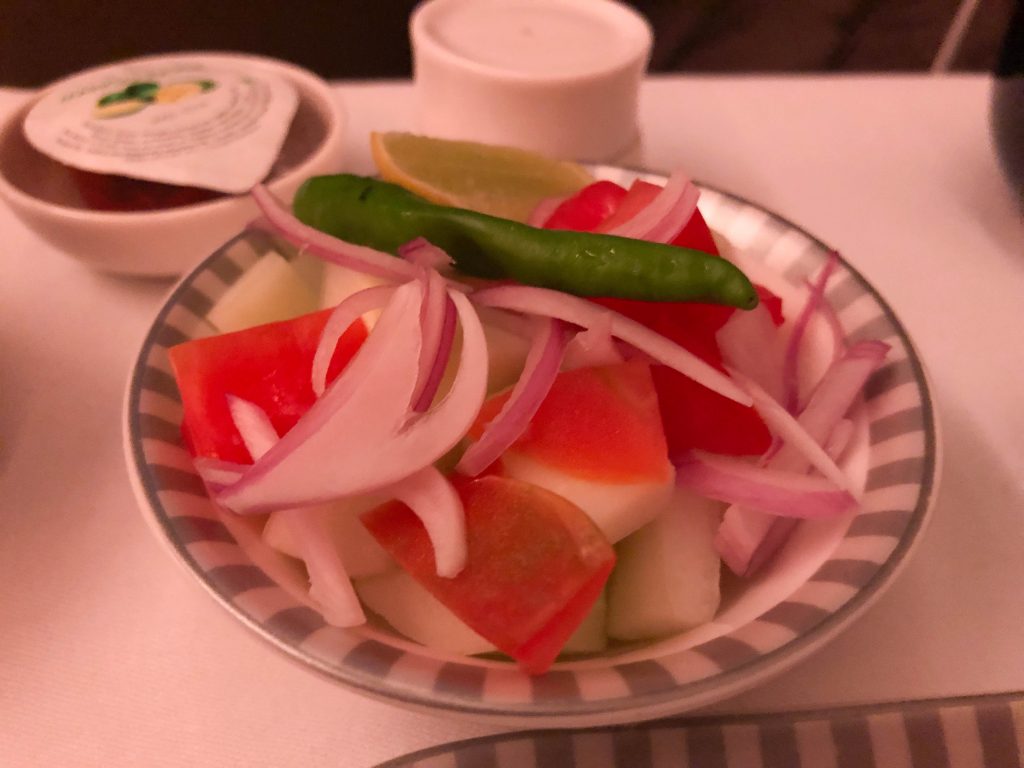 Lastly they served some cucumbers, onions, and pepper as a side. I really like spicy food so this refreshing portion of veggies was welcomed. 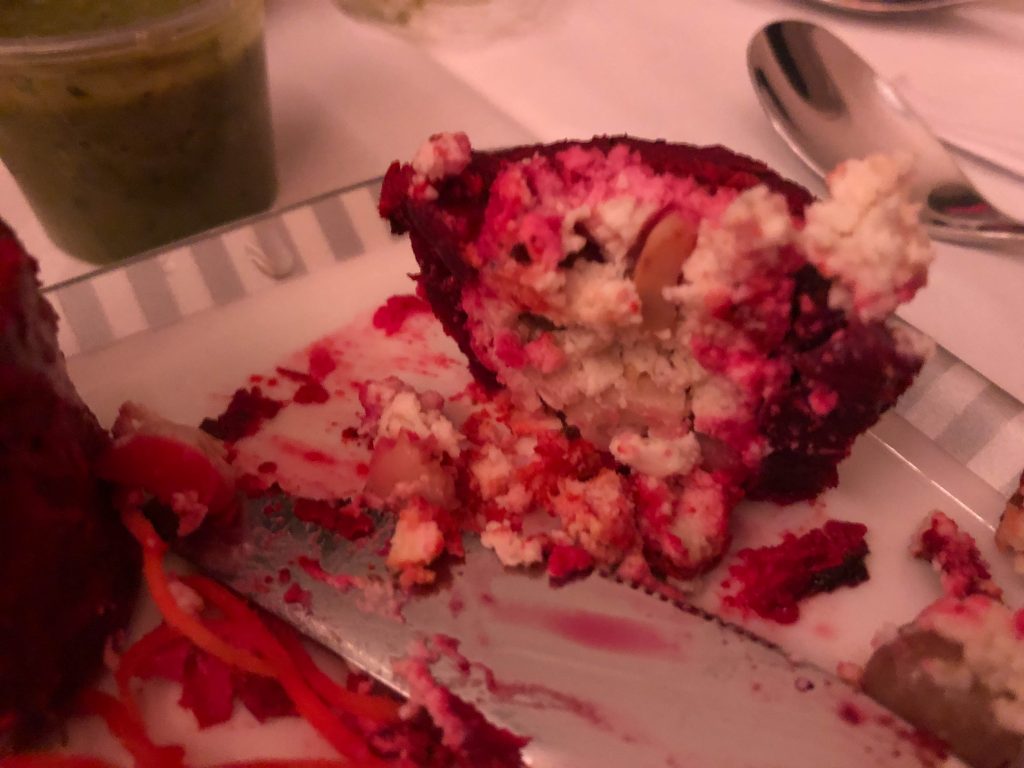 As I dove into the potato croquette I noticed that it was filled with paneer, a popular Indian cheese, and nuts. The flavor on the inside was really nice, but the outside was still a bit hard for me to cut into. As I worked my muscle to get these open it was rewarding and I easily finished off these two small croquettes.

As I waited for my main course I re-upped on a glass of red wine in anticipation for my meal. I decided to go with a glass of 2015 Nipozzano Chianti Rufina Riserva, an Italian red that retails for about $15. 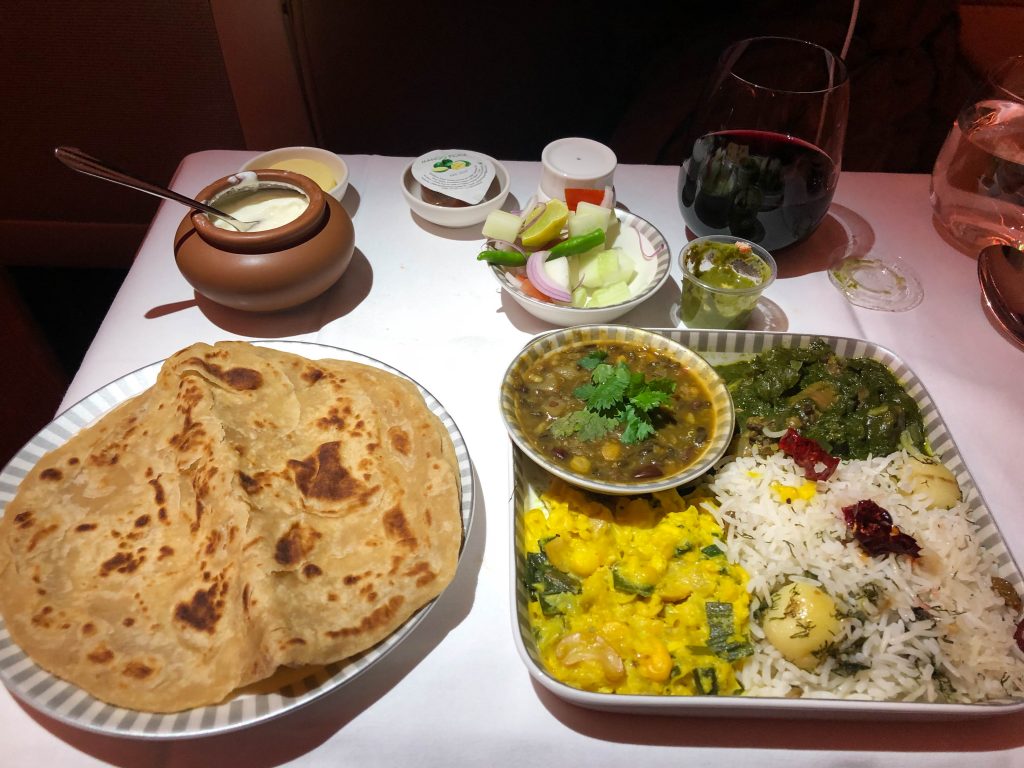 When the main meal arrived I was a little surprised that it wasn’t served like a traditional thali. Usually served with small bowls all in a circular platter. But this was an airplane and I was starving so I didn’t think twice before digging in. 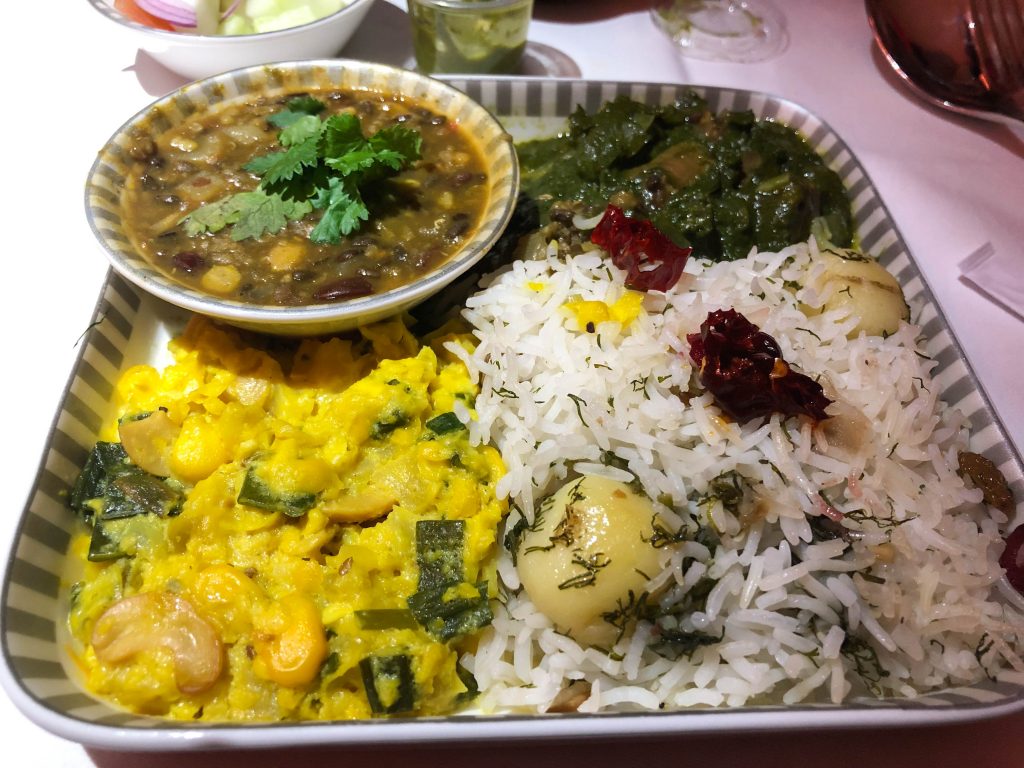 My meal looked delicious but I remained patient and went back to the menu to made sure that I knew what everything was. I ordered the non vegetarian thali only because I like the options a bit better, and I had eaten plenty of vegetarian food up until then. 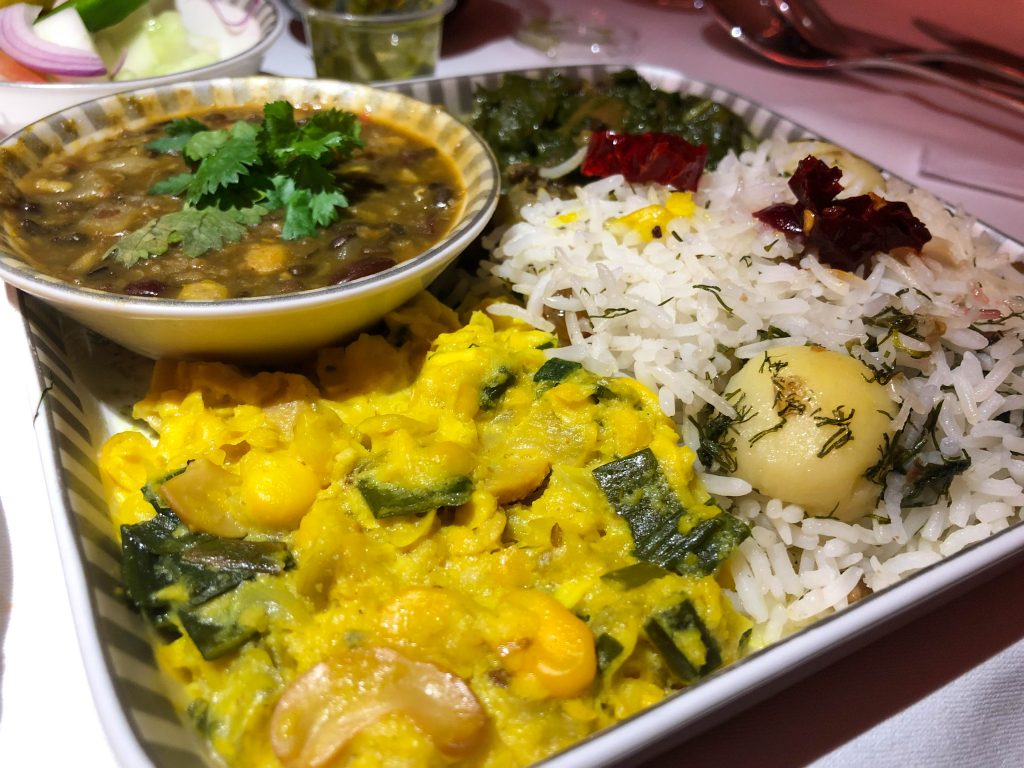 The yellow colored curry didn’t seem to match up with what was displayed on the menu. It looked like some sort of dal or lentil dish, but the menu insisted that it was spiced potatoes. I couldn’t really tell at this point although I knew that it had cashews, corn, and something else inside. I enjoyed it none the less. 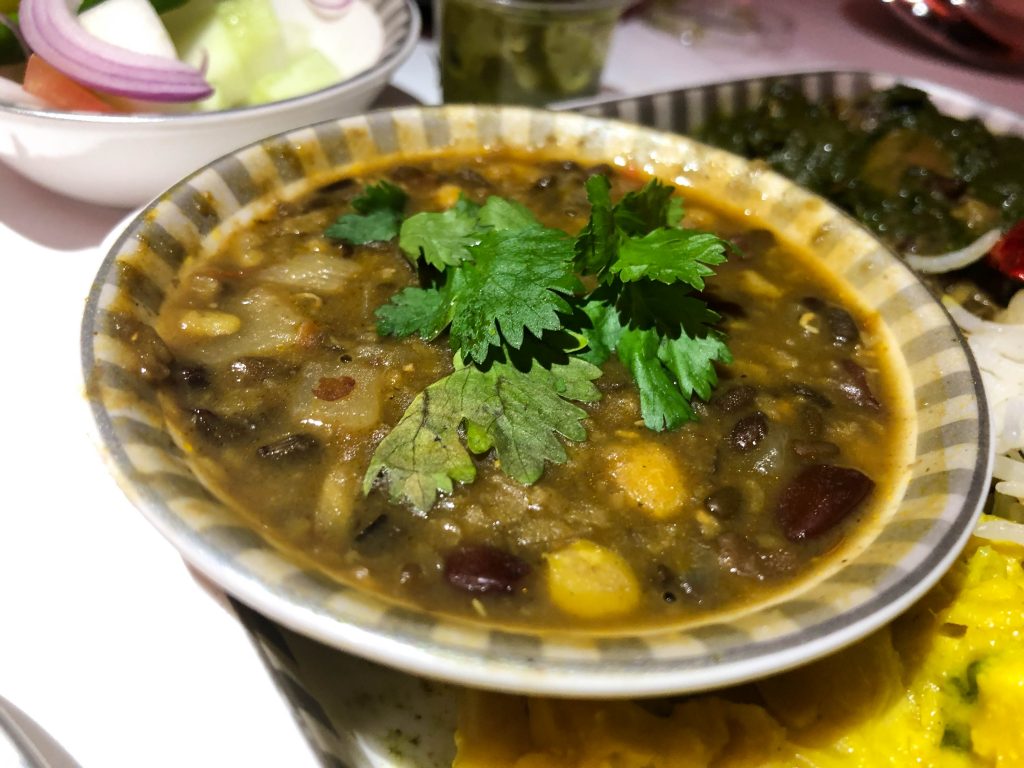 The bowl was filled with black lentils and bengal gram simmered with ginger and chili. A very popular south asian dish that was served with both the vegetarian and non vegetarian thali. It was quite good! 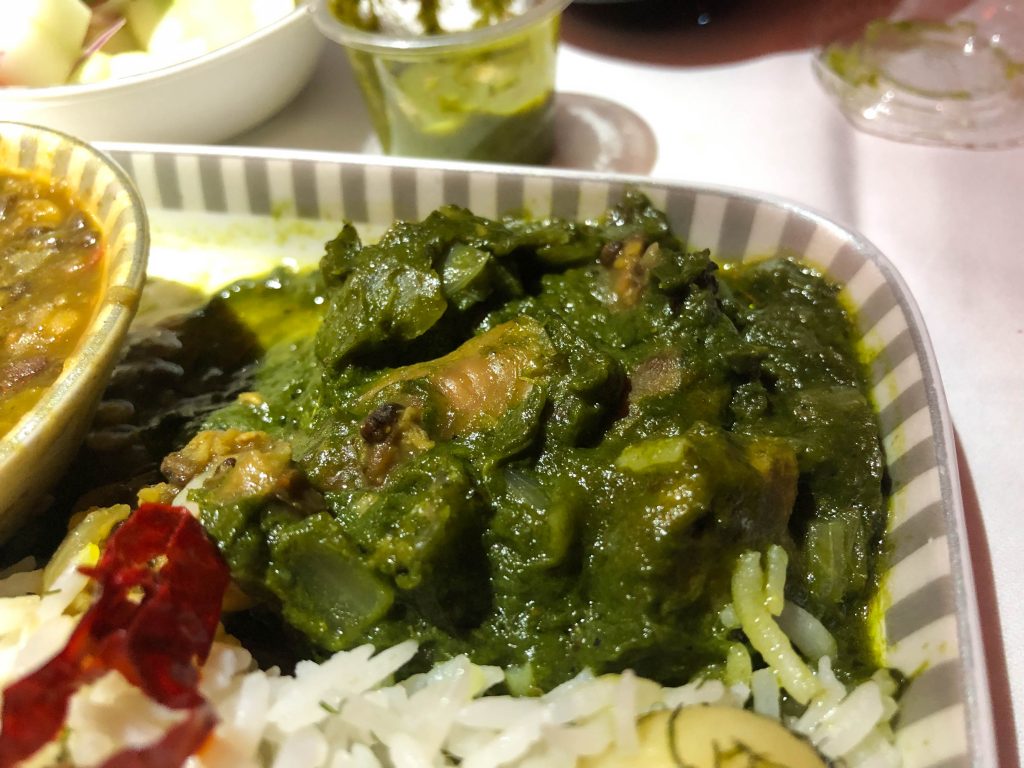 This dish also didn’t seem to line up with the menu, which said that it was supposed to be spiced prawns, but looked like some sort of lamb. It was all mixed together in a saag spinach which was creamy and salted nicely. 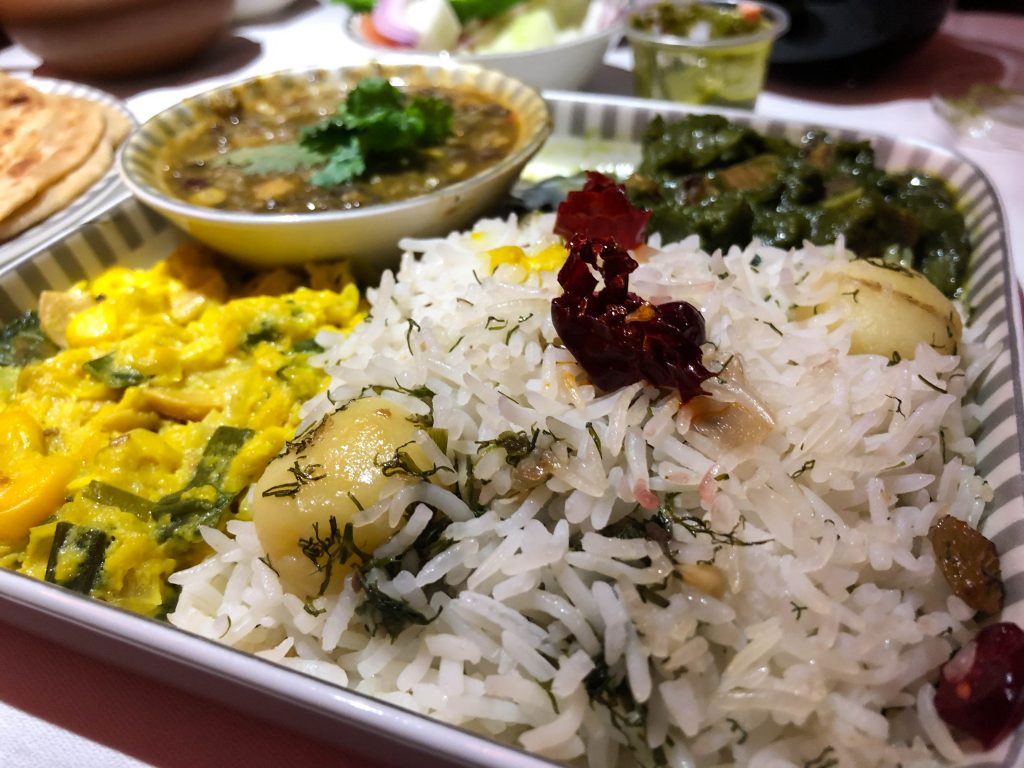 The rice that accompanied all three dishes had a nice amount of garlic and chili infused into it. I really loved the flavor of the rice and could eat it plain. I actually did, as I did not want to mix the flavors too much, and it was one of the highlights of this meal. 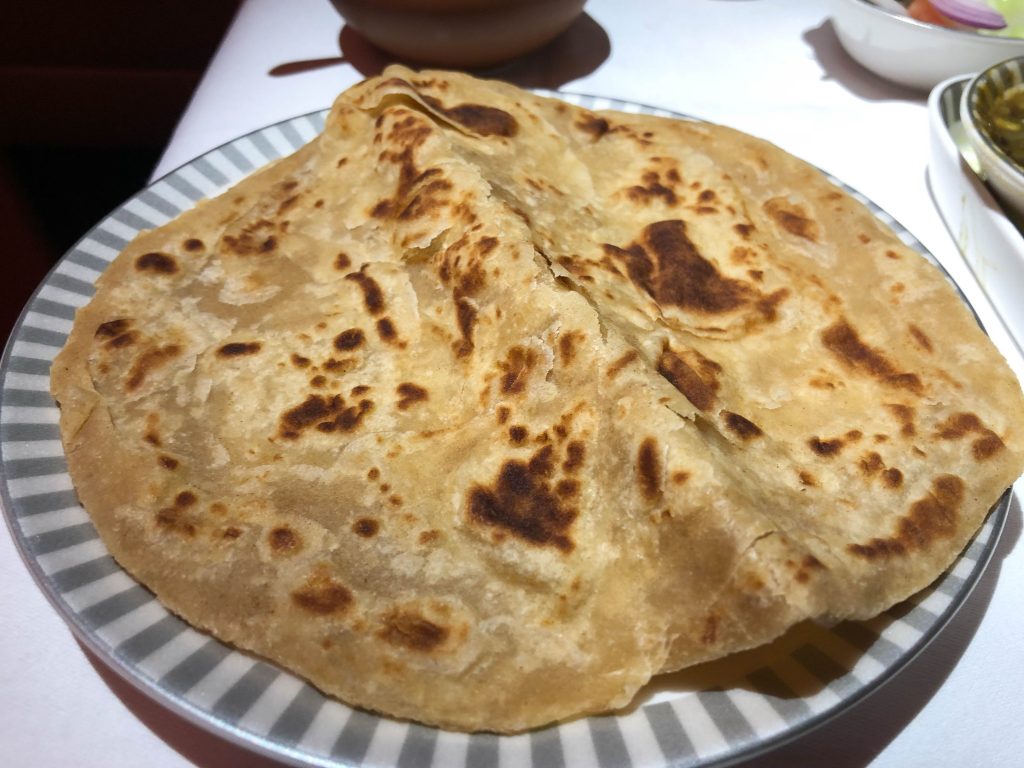 The meal was also accompanied with a warm roti or proper Indian flatbread. This was great to scoop up those lentil and as always paired nicely with the spices and flavors.

To finish off the meal I had to get some sort of desert. 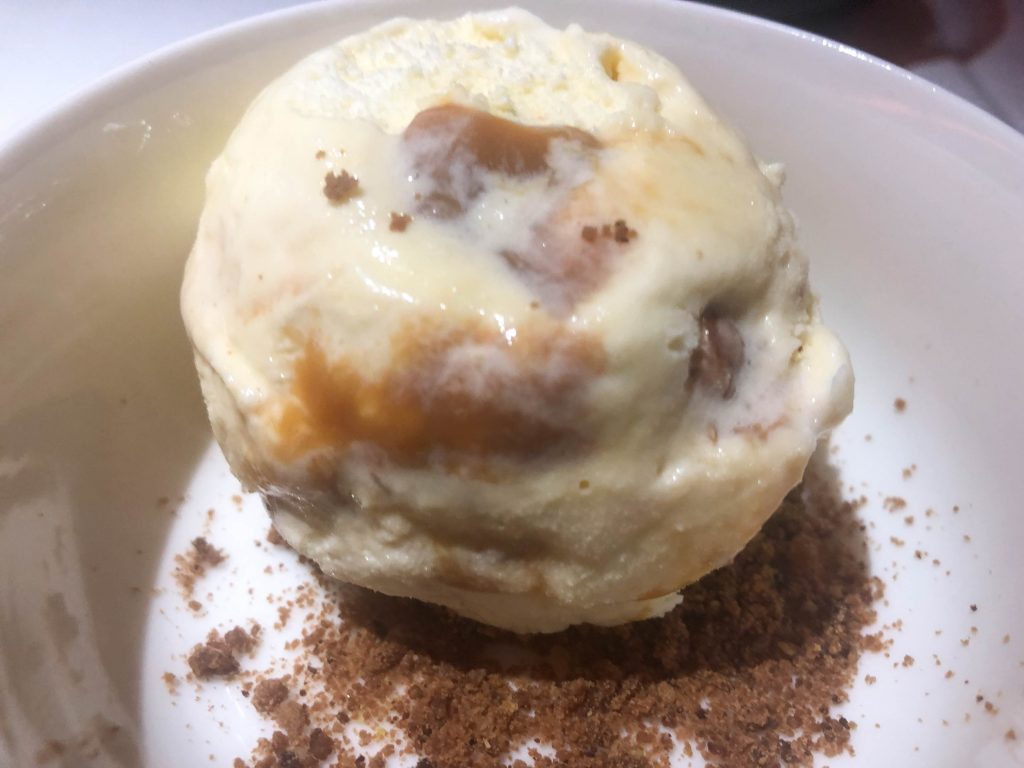 A scoop of ice cream

You can never go wrong with ice cream on an airplane. I went with the caramel ice cream over gingerbread crumbs. It was delicious and the perfect finisher to a flavorful meal.

Singapore airlines a380 has some of the better business class food that I’ve ever had. They proved worthy of their rank as a top tier airline, and the way they prioritize their food offerings paid off. You can tell they really invested in this whole experience.

I had to get some shut eye before arriving early Singapore morning, and I only had 3 hours left of flight time.

My only down side of this experience? The flight was too short.

I got a quick nap in and woke up just as we were getting read to descend. Luckily I got one last order in, an espresso! 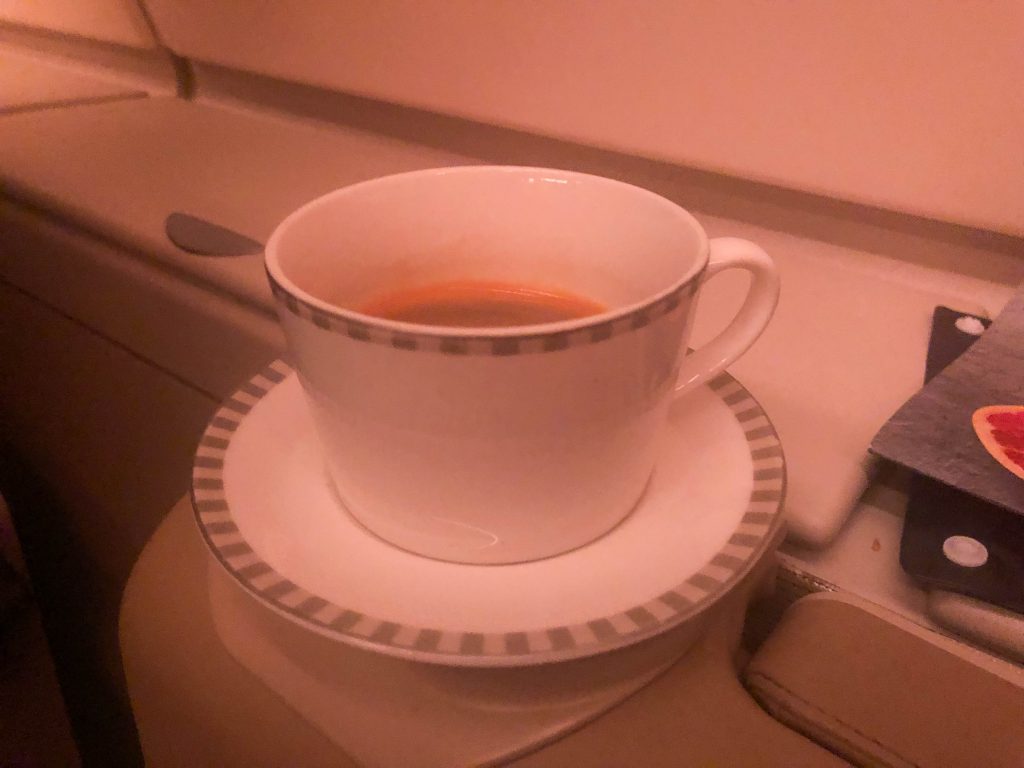 A perfect way to wake up

I love that this Singapore Airlines A380 flight served espresso on board. I was kind of surprised last year when I discovered Delta does not.

I ordered a double shot of Illy coffee that was the perfect way to start a busy travel day.

With a smooth landing and entry into Singapore, I looked back on this flight as one of the better ones that I’ve ever taken. I even got a shower and snack in the Singapore Airlines lounge in Changi right as I landed.

Singapore Airlines was worth every penny. If you get the chance to a board their network I couldn’t recommend them more.