This was an iconic flight. I was all set to fly on Singapore Airlines A350 business class to Newark, better known as the longest flight in the world!

I was traveling extensively in India and looking for a way home when I saw an amazing deal to take this flight. Although it would add an extra 10 hours of flight time to cut through Singapore, I couldn’t have been more excited for this trip.

People told me I was crazy for doing it, but how often would I get a chance to fly this route? Especially in business class? Probably never again.

I had heard so many rave reviews about Singapore Airlines and watched countless videos of The Points Guy’s experience that I knew this would be a special flight.

But this was also no ordinary time of year to fly. It was early March 2020, and the COVID-19 virus was sweeping across the globe. Since I was already abroad I needed to find a way home as soon as possible, and this led me to booking a one way on this route for 50% off the normal fare price! For a Singapore Airlines A350 business class flight, it was almost too good to be true.

As soon as I booked my flight online I was brought to a pre departure meal selection. Usually it’s an easy selection, but on this flight I really had to think. After all I had 3 meals to select from! I wanted to plan them out to get the most out of my experience.

A bevy of options to choose from

I decided to split and do one meal with the inflight menu, and the other Book the Cook option. I had passed on this option on my flight via the A380 from Mumbai so knew I needed to try it this time.

For those not familiar, Singapore Airlines “Book the Cook” is an extensive menu of dishes created by chefs from within Changi’s airport kitchen, cooked just for you. It is no short list either. For this flight I counted over 40 dishes to choose from including traditional dishes like Nasi Lemak, Hainanese Chicken Rice, and the airlines most famous dish, the Lobster Thermidor.

With so many options I had a really hard time deciding what I was going to get. I decided to go with something more traditional and ordered the Laksa, a bowl of rice noodles served in a rich coconut broth with shrimp and bean curd.

A few days later I was set to take off. After a journey that started the night before in Mumbai where I visited the GVK business lounge before I departed on short flight to Singapore. I was set to have a 16 hour layover to prepare for the longest flight in the world later that night.

Singapore is an amazing city. I spent all day walking around and sampling food from hawkers markets and restaurants along the way.

I arrived at the Changi Airport a bit early, which gave me ample time to checkout The Jewel. I even made a quick stop in the business lounge on my way out.

As I boarded the flight I was struck with how big the seats are. 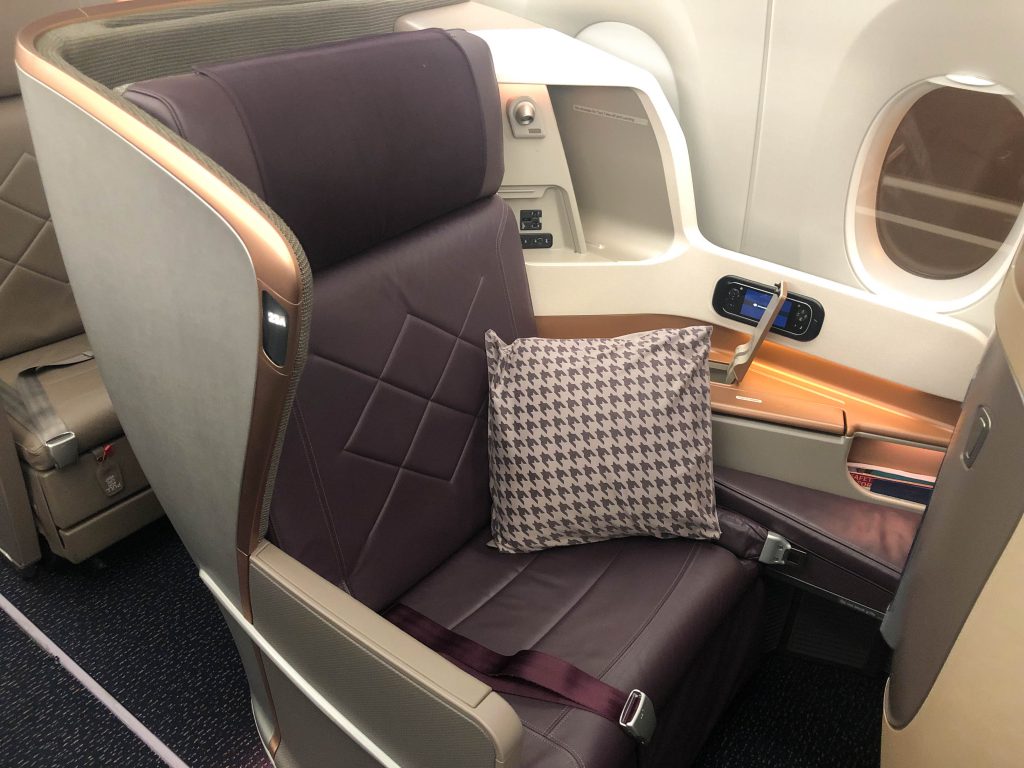 Seat 23A was mine to ride for the roughly 18 hour flight. This was basically like a small couch. 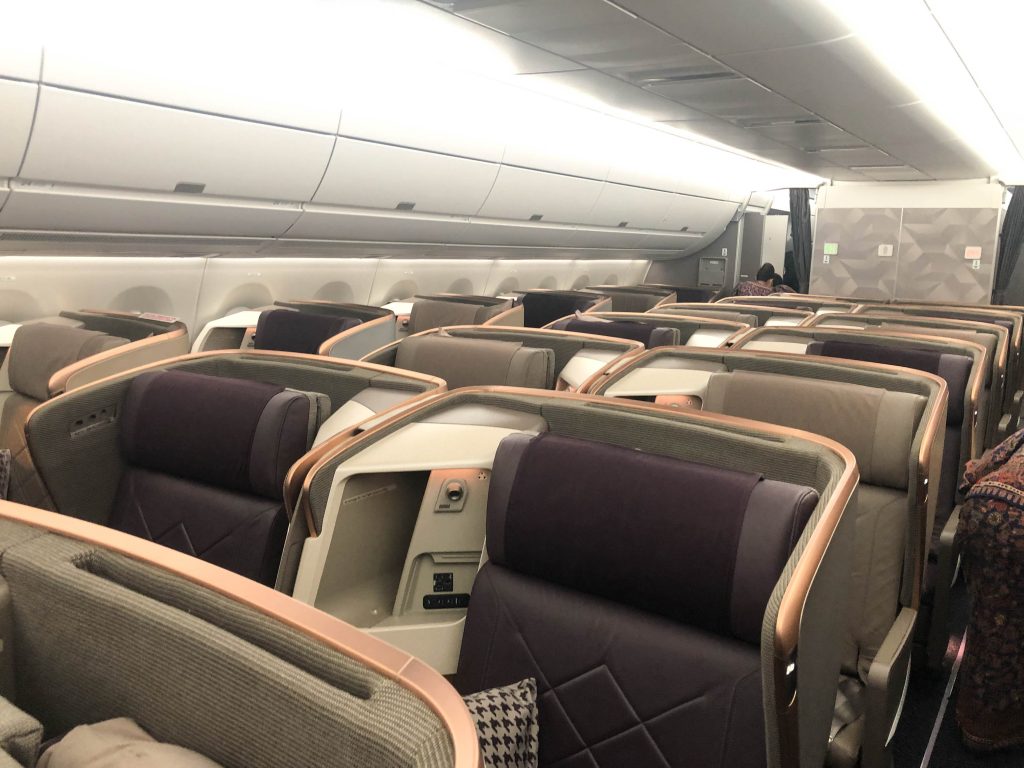 Once again the cabin was virtually empty. So empty, in fact, that I maybe counted 15 people on the entire flight.

This was a strange time to fly with a global pandemic looming, but I’m still shocked that Singapore Airlines was continuing to make the journey. It worked in my favor, though, and I was relieved that they would be getting me home. 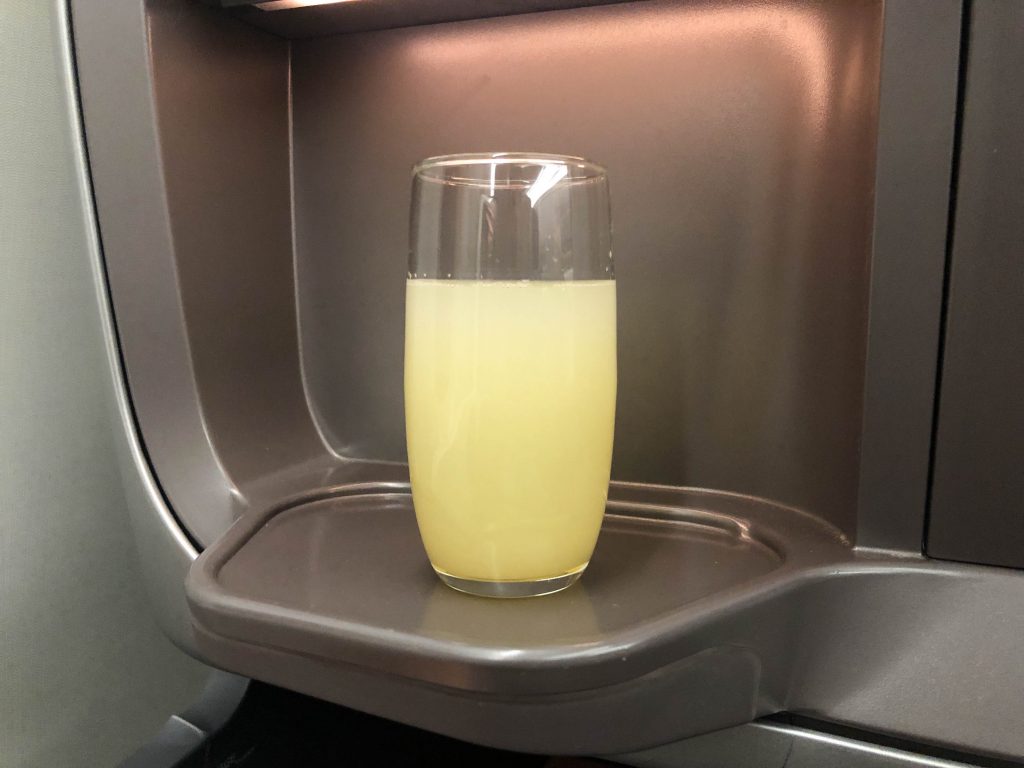 I had plenty to drink during my day in Singapore and in the lounge, so as the welcome drink came around I chose the ginger lemonade. This was exactly what I needed. Not overly sweet or sour, it was a refreshing start as I settled into my seat.

Before I knew it, the meal service began to roll out right away. 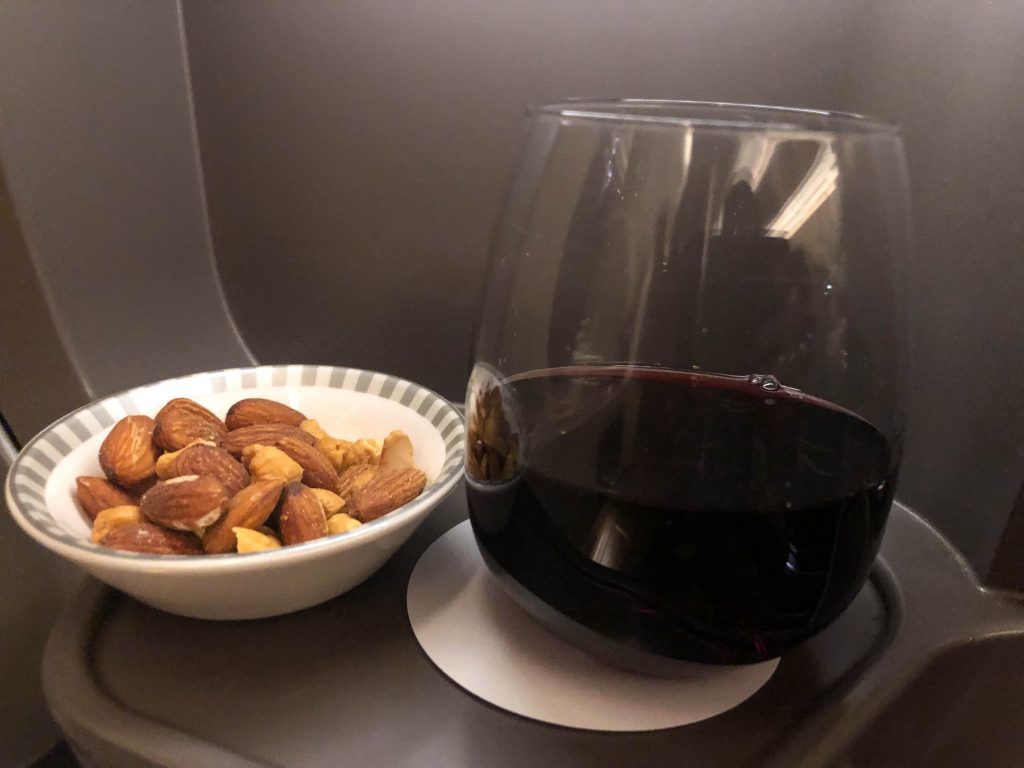 First up – Wine and Nuts

I had to at least try the wine on board so ordered a glass of 2015 Chateau Magnan La Gaffeliere from Bordeaux, France which retails for about $30 a bottle. The nuts were also served warm which is always a nice touch.

My entree came out a few minutes later. This was maybe the fastest meal service I’ve ever had on any flight. 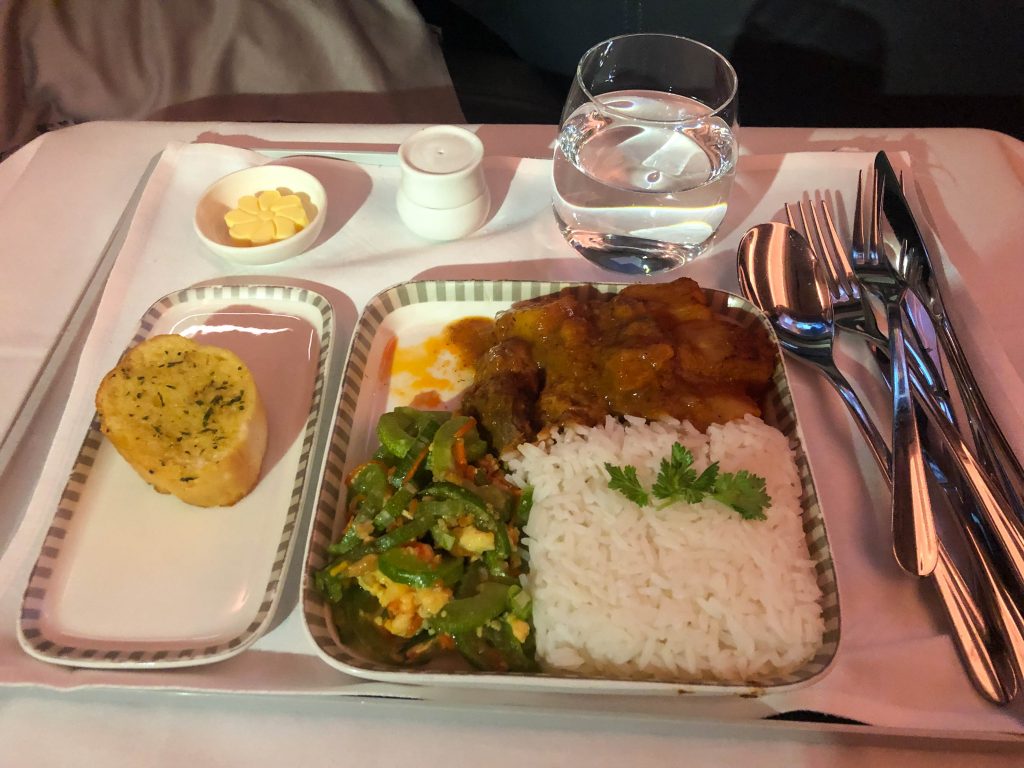 I had decided to order off the in flight menu for my first meal. It was a little surprising how it came out all at once. I guess it was already late and most people wanted to get to bed so this made sense.

I went with the Gaeng Massaman Neau which is a Thai style Masaman curry with beef, seasoned veggies, and rice. 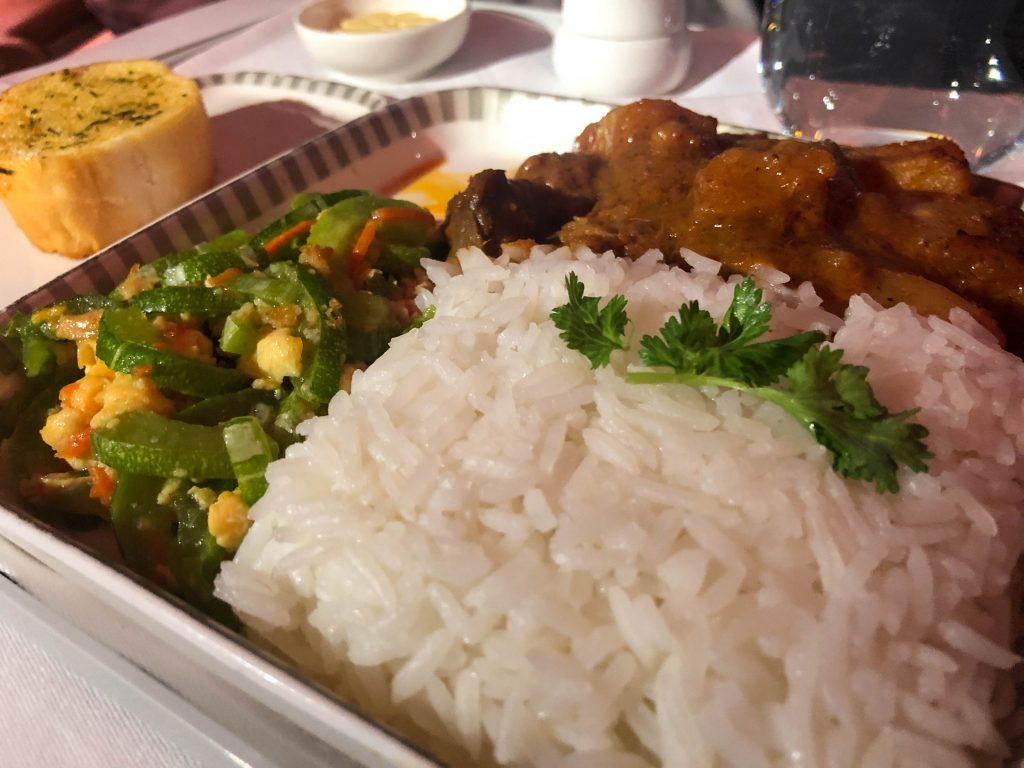 The beef was a really nicely made dish and it was spiced very well. I really liked the side of veggies that seemed to be made up of cucumber, green peppers, and some sort of lentils. I thought it would also be spicy but instead it was mild and pretty refreshing.

What came next was a bit of a treat, at least in my eyes. 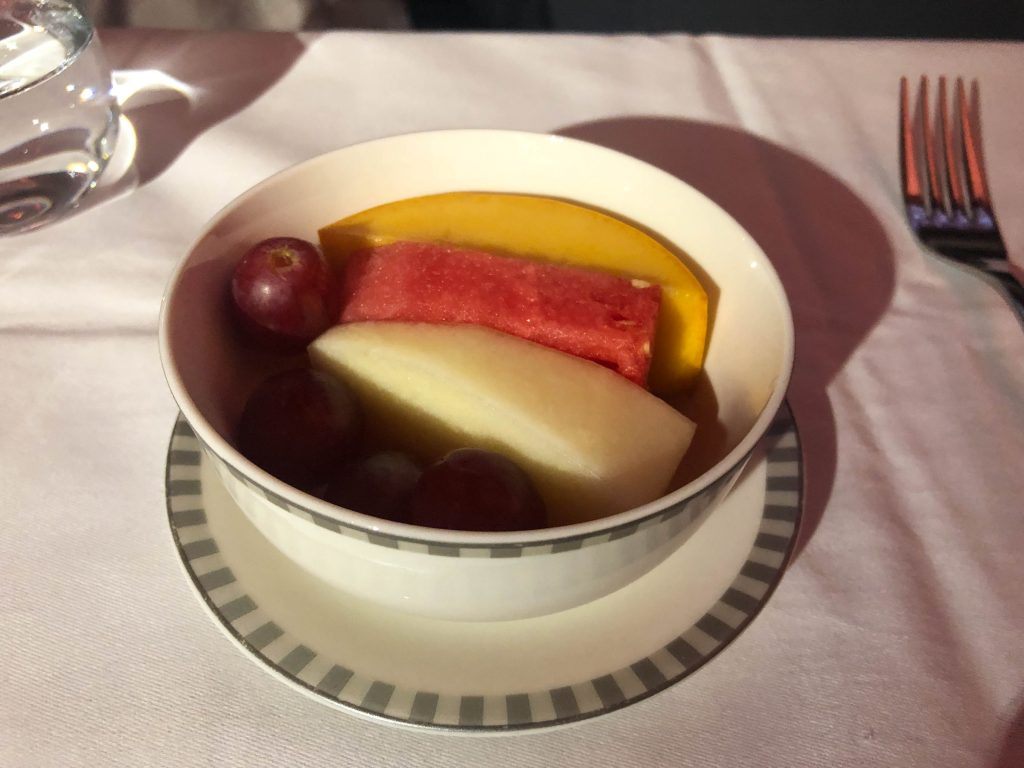 I was pretty thrilled. As I was just starting to get into bed mode and expected a more decadent desert. Did I really want to scarf down chocolate cake, ice cream, or some other rich desert before sleep? Knowing myself I would have reluctantly eaten the dessert and regretted it later. 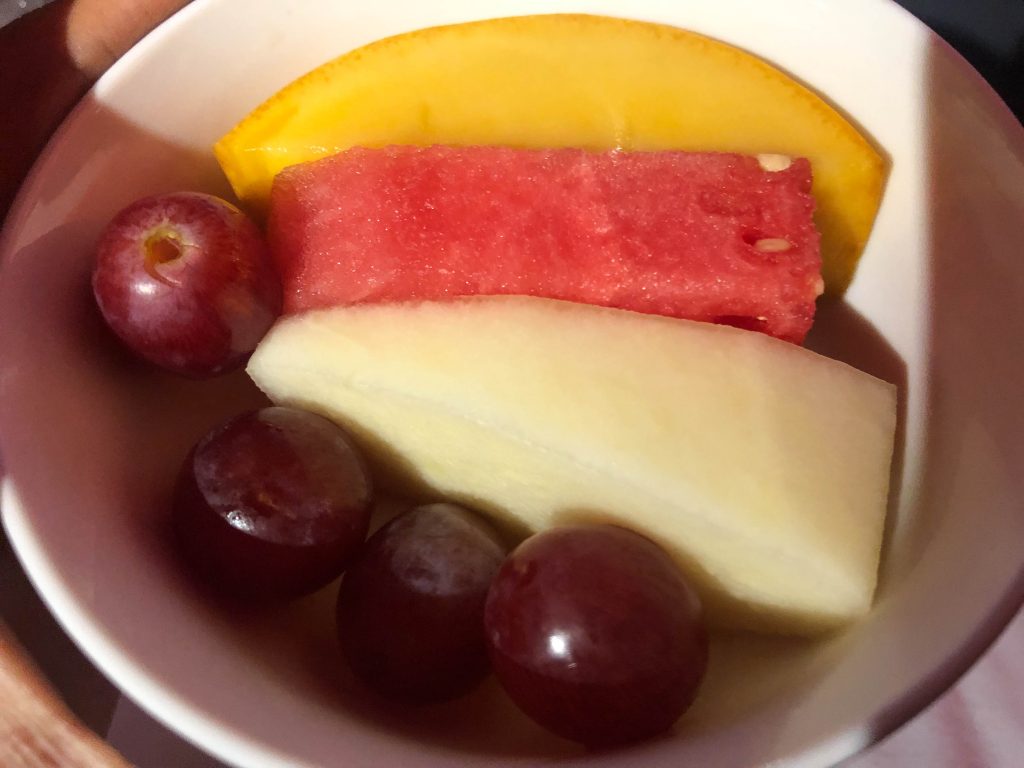 I was glad Singapore offered this selection of different fruit and it was exactly what I needed before I got to bed.

As they cleared meal service I went to slide my bed down and found out that it doesn’t actual recline into a full flat position. You need to flip it over.

This was a bit strange and the flight attendants helped me get it into position. 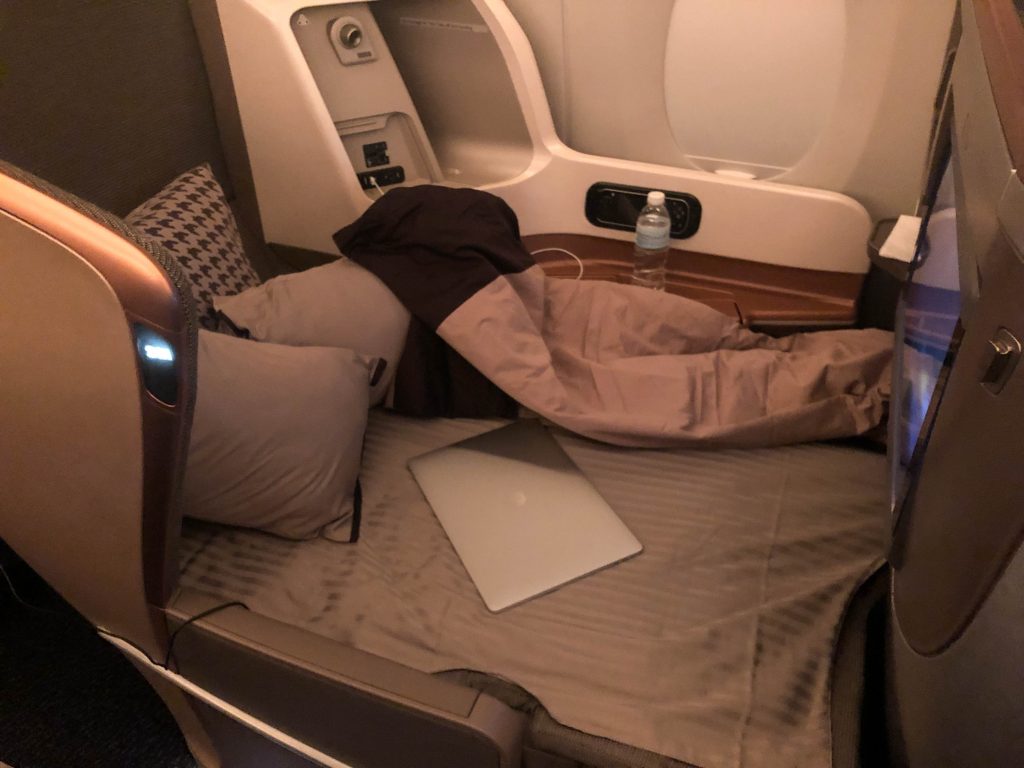 A spacious and comfortable bed

As my bed was made I couldn’t believe just how big and spacious it was. You can see my laptop, a 15 inch Macbook pro, for size reference.

The bed offered a ton of room to sleep on your back, side, or even spread out. The only downside I would mention is that your feet go into a small cubby on the left, so you are a little bit sideways. If you are under 6 ft then this should be no problem, but I can imagine taller folks having some discomfort.

I did something on this airline that I never thought possible when flying. I slept for 9 hours straight. A beautiful, deep sleep.

It was an amazing way to rest and the next thing I knew I was waking up for meal number 2. I was especially excited as I had placed my special meal request for this one. 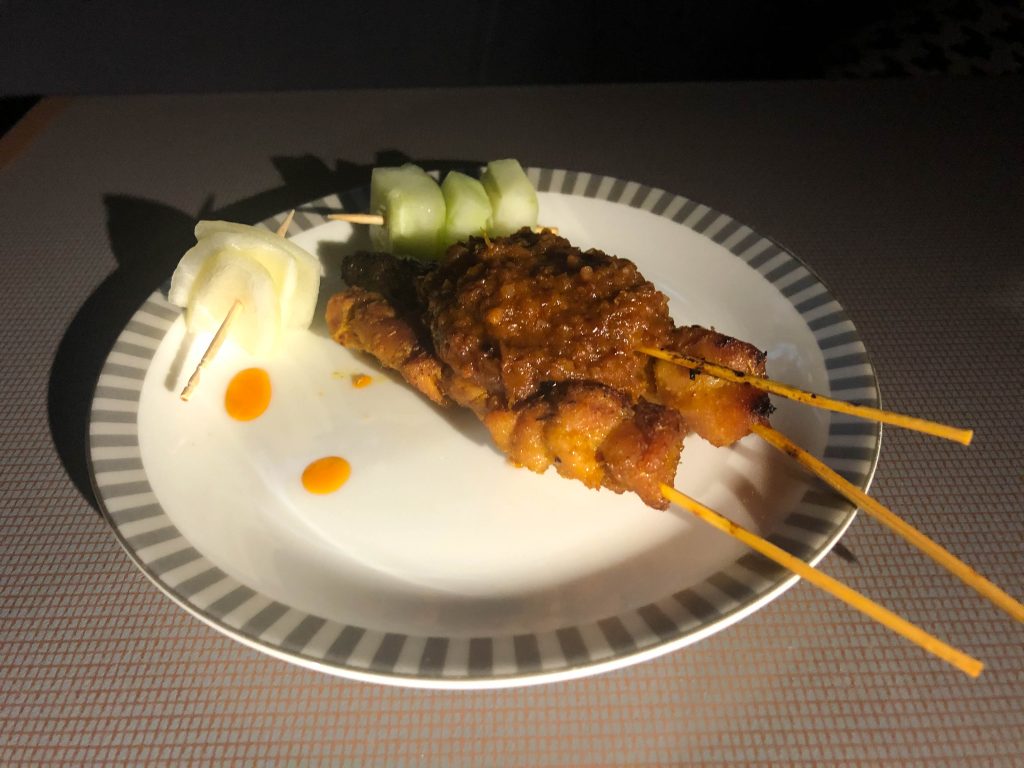 The crew started me off with their famous chicken and lamb satay with spicy peanut sauce. I found the meat to be really tender and the sauce added a nice kick. It was pretty incredible for airline food.

What a way to start off breakfast. 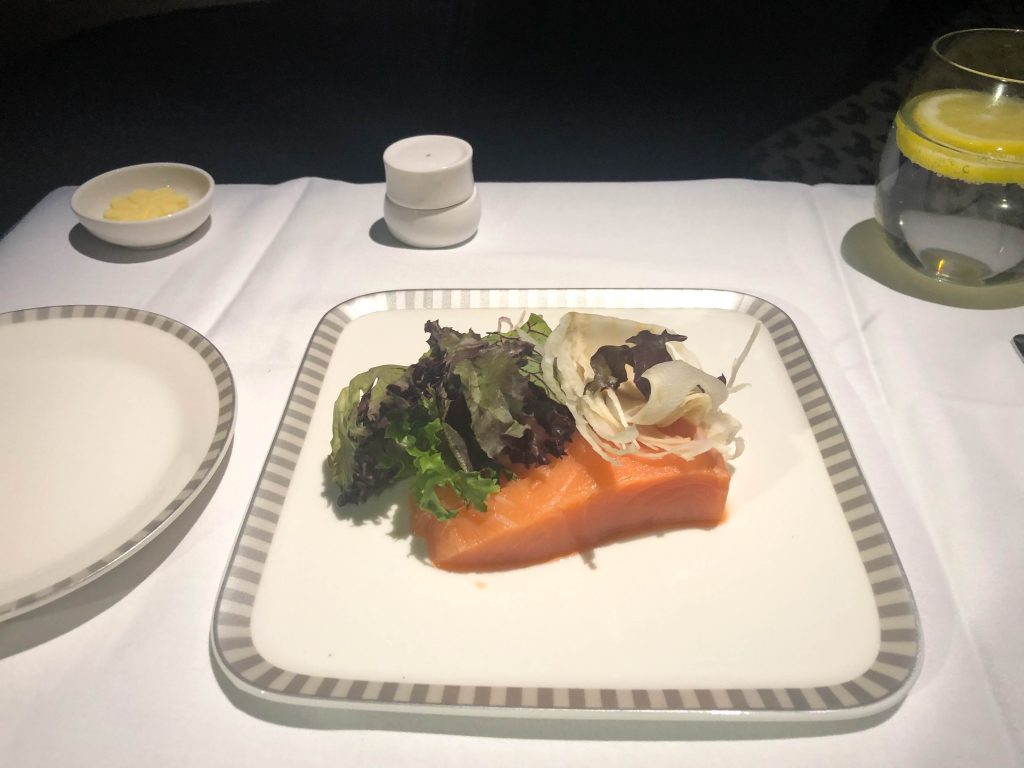 Next up was a piece of salmon sashimi that was served with greens and an orange. 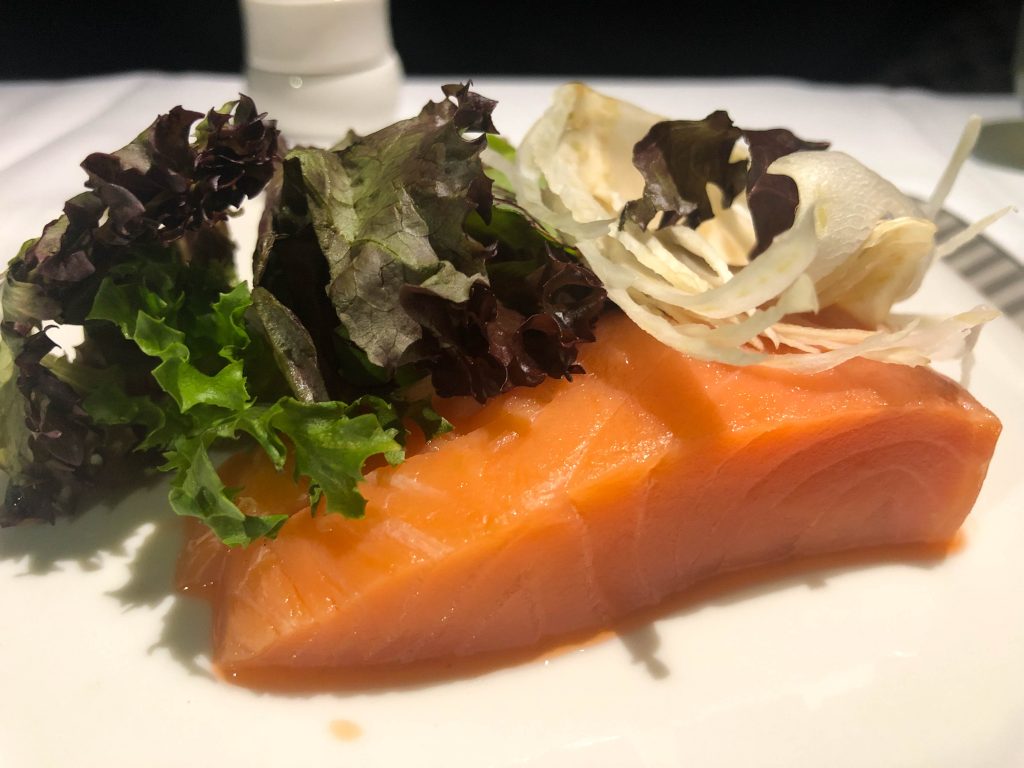 I don’t usually get that excited for raw fish, especially on airplanes, but this salmon was really good. It paired well with the citrus and bitter greens and was a nice, light dish after the satays.

Finally it was time for the main event, the Laksa. 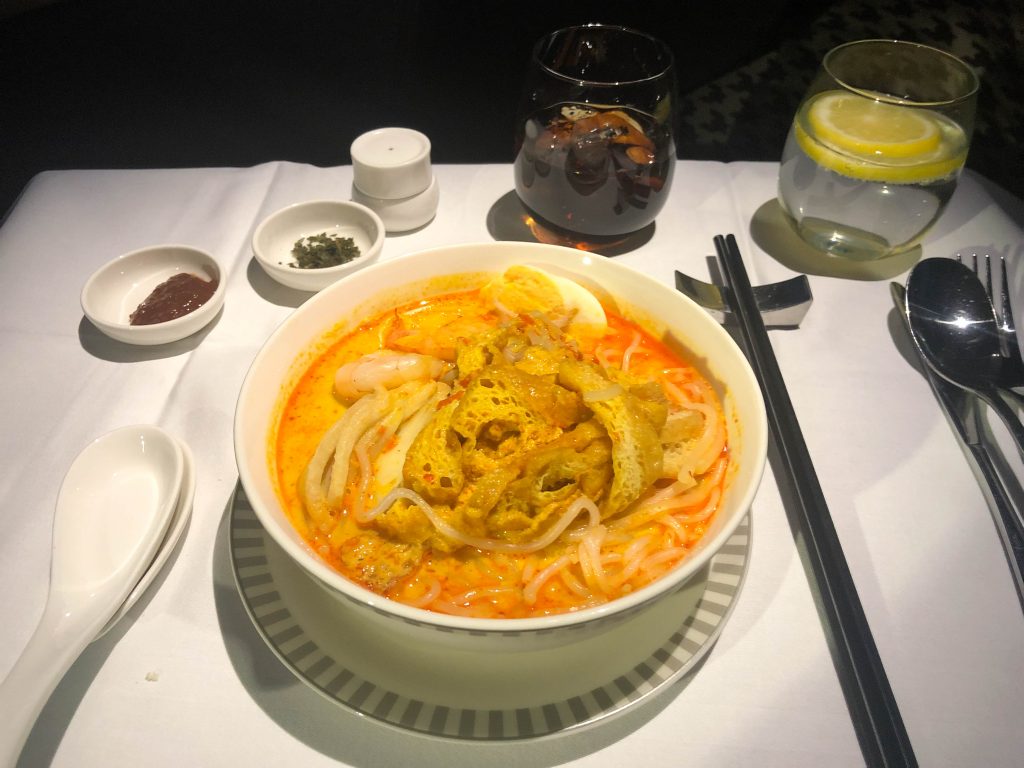 The dish came out and just the smell of it blew me away. It was fragrant, spicy, and looked like one of the most appetizing bowls of noodles I’ve ever had. Forget airline food, this dish looked like it could stand out in any restaurant. 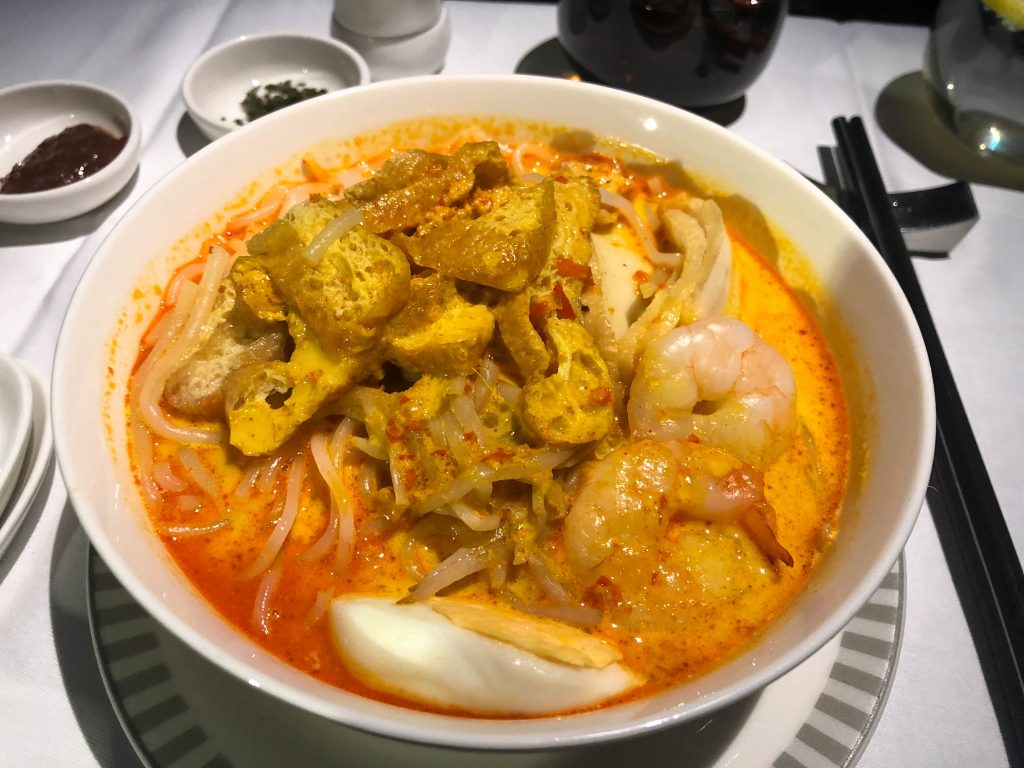 Closer inspection had me spot plenty of bean curd, shrimp, and a hard boiled egg. 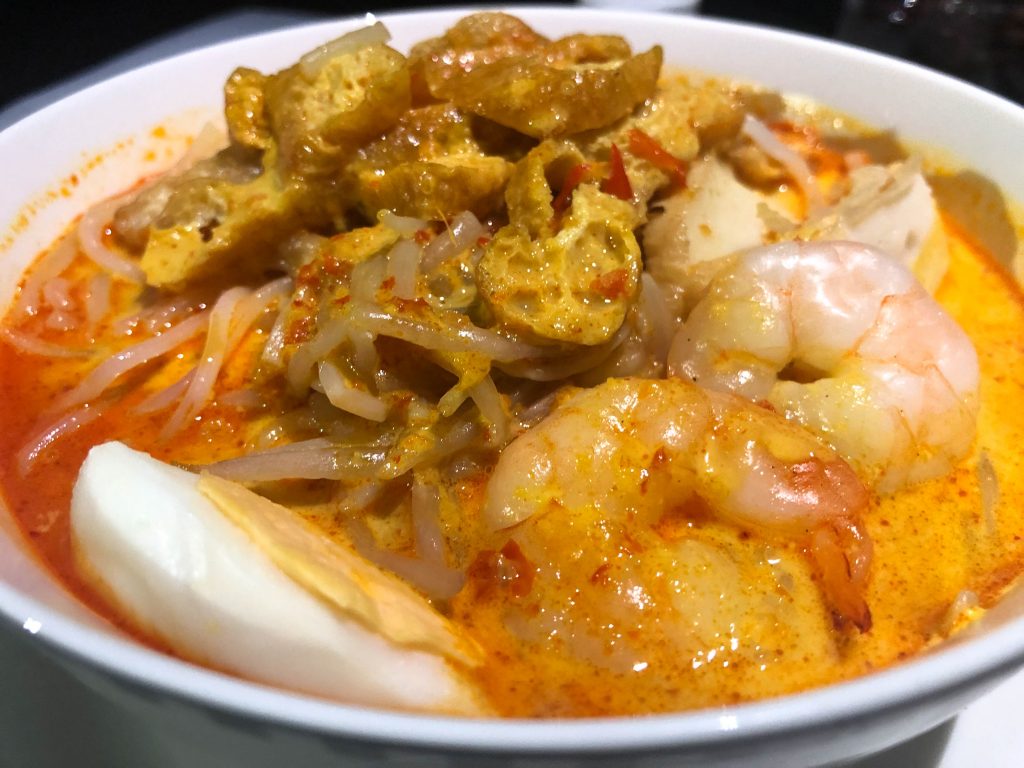 The entire dish was nicely spiced, and really helped me wake up. After consuming it, I got so full that I could’ve fallen asleep again. 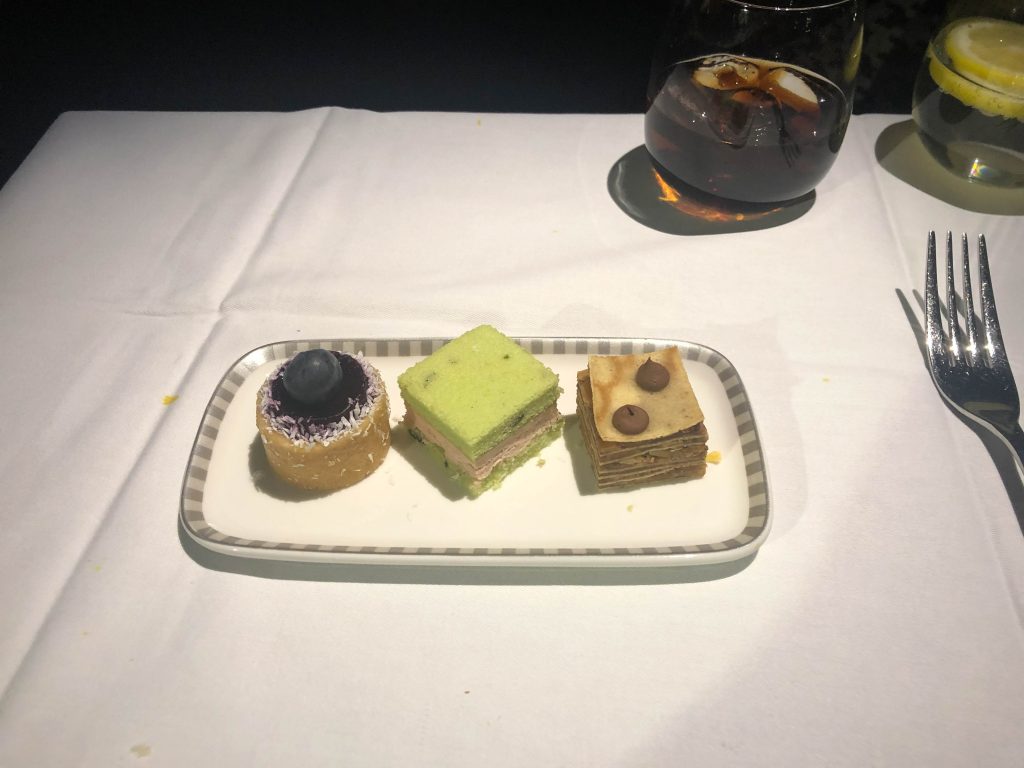 Dessert came out next, and this time it was much richer than the fruit bowl, but still felt a bit light which was nice. 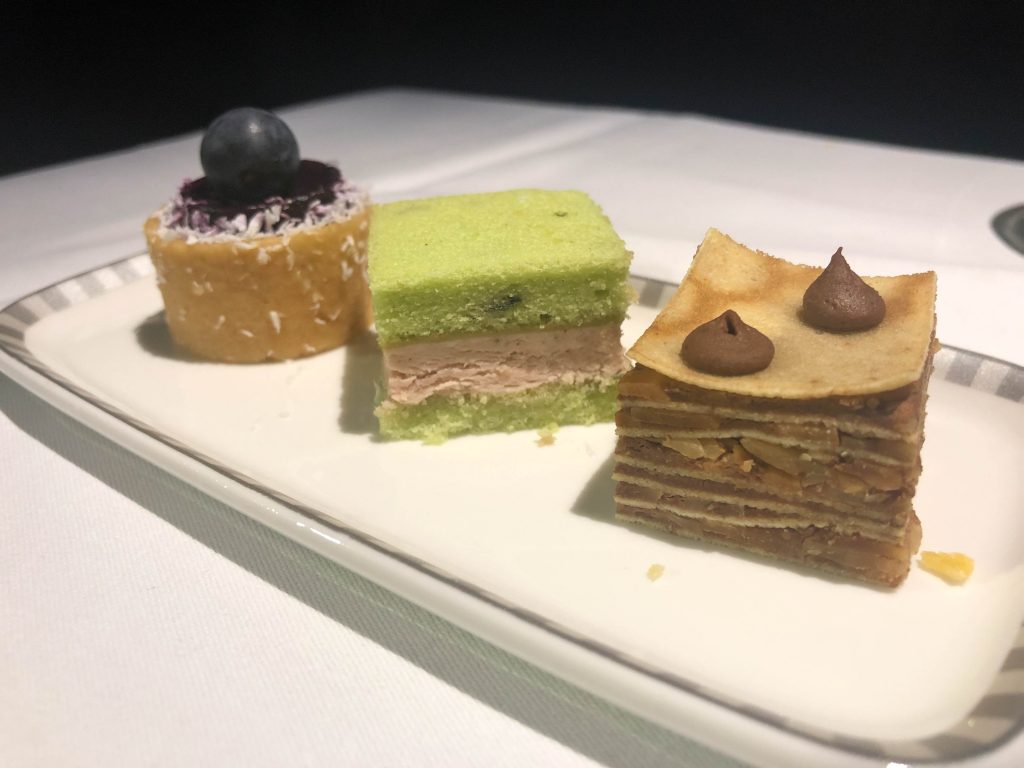 I tasted a bit of each item, but didn’t end up finishing any of these desserts. I don’t have a massive sweet tooth but it’s always nice to get a few bites after a hearty meal. A solid palate cleanser.

As we were approaching landing in New York I was a bit shocked at how fast the flight had gone. It was 18 hours and the longest flight in the world but why do I feel like I could’ve done it all over again back to back. Singapore Airlines A350 business class was a luxury experience that stands out for incredible food, service and immunities.

This was truly an unforgettable experience and the level of comfortable on this flight couldn’t have been better.

The food especially was on a different level compared to other carriers. They blew away US based airlines, and are hopefully setting the bar high for all other carriers to rise up to meet. If you have the chance to fly on Singapore airlines A350 business class flight, I highly recommend taking it.