When thinking about kitchen staples, it would be impossible not to include Le Creuset cookware on the list. Since 1925, Le Creuset has earned a special place in the kitchen and hearts of cooks around the world. They are perhaps most well known for taking a kitchen essential – cast iron cookware, and refining it by making it more functional and better looking. I’ve had my eye on grabbing a Le Creuset dutch oven ever since I got into cooking. 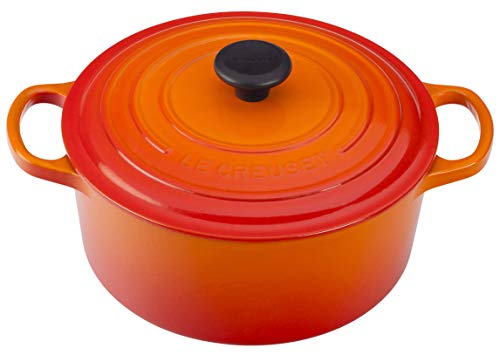 The dutch oven’s elegant design and appealing pop of color had me constantly dreaming about adding one to my own kitchen. I tried to ignore it, but the itch grew stronger the more I cooked and experimented with different dishes and ingredients. I just had to get one.

Simply put, Le Creuset Dutch Ovens are an investment. These dutch oven’s start at around $155 for a 1 quart size and can get as expensive as $360 for their most popular model, the 5 1/2 quart oven. Certainly not cheap.

After many months of consideration I finally decided to purchase one for myself.

I decided to with with the more expensive model, a Le Creuset 5 1/2 QT Dutch Oven in Flame Orange. It would definitely stand out.

As soon as I arrived home and removed it from the box I was pretty excited. After so much time spent dreaming about this cast iron oven, I finally had it. The intense splash of color that it added to my mostly white kitchen was really nice. I left the dutch oven on top of the stove, proudly showcasing it as a pseudo piece of art.

Since this was my first time owning a dutch oven, I hadn’t spent too much time researching potential recipes just yet. I always believed that it was pretty versatile appliance, but I didn’t even have a signature dish in mind to make prior to making my purchase.

Now that I had one there was only one thing to do – immediately test it out.

I ran to my computer and began scouring the internet for any and every dutch oven recipe under the sun that I could pull. After a ton of research I narrowed it down to a few that caught my eye:

No Knead Dutch Oven Bread by Girl Versus Dough

A Classic Chili by The Stay At Home Chef

I decided to go with the recipe that appeared to take the least amount of time and effort, but looked like the most satisfying. I settled on making the “no knead” dutch oven bread first.

After a quick wash of my dutch oven, I turned the setting to preheat and was ready to go. Having never used a dutch oven before it took a little getting used to, but ultimately the settings were easy to get the figure out.

The first thing I noticed was the weight of the pot. That thing is HEAVY. While I’m used to using a regular cast iron skillet around the house, the constant picking up and maneuvering of a large dutch oven was tough. When the dutch oven is preheated it is scorching hot, and very difficult to move. And forget about touching it without oven mitts on.

But once I got used to it I fell in love. There was just so much room I had in the pot to work with. The deepness of the oven was striking. And like any other cast iron product, the oven quickly heats up and retains it very well, especially with the lid on. I had no problem using it on the stove or in the oven.

I quickly whisked together the dough recipe, a delight considering that no kneading was required.

After removing the preheated pot out of the oven, I made my first mistake. I attempted remove the top with bare hands. A big mistake – the handle is not heat resistant and gets extremely hot. Ouch. I pressed on undeterred.

After struggling a little to place the dough in the pre heated pot I managed to get it inside and placed it back in the oven.

After a brief 40 minutes, the cooking was done. I popped out my bread and placed it on a cooling rack, very satisfied with the end result.

With a minimal clean up, the dutch oven bread was a simple starter recipe that came out great. The taste was perfect and had just the right amount of crispiness. It’s an easy recipe that I will definitely be making it again in the future. In fact, it just might become one of my signature dishes. While the bread was simple, it didn’t give me a chance to fully test out my new pot, but I was still happy with it. It’s easy to see the potential for future recipes down the line.

Overall the Le Creuset Dutch Oven is more than just another pot to have in the house. It’s a historically effective tool that delivers iconic results, and it’s inspired me to keep exploring the vast world of cooking. While it may not cheap by most standards, in my opinion the joy it brings with each use makes it entirely worthy of the price tag. The possibilities are endless and fun.

Whether shopping for yourself or a gift don’t overlook the brand name classic that is Le Creuset. And if you need recipes, be sure to check out these essential cookbooks for imaginative recipes and ideas!

*Already have a cast iron dutch oven and are wondering how to clean it? Be sure to check out this guide to effectively clean any cast iron device!