Lufthansa has always had a fantastic reputation as an airline. From quality amenities to upscale food, they’re known to really nail the finer details of traveling.

Although I’ve never flown with them in the past, I was excited to try the Lufthansa business class food on a flight that I booked from Frankfurt, Germany to Bengaluru, India.

These days flights usually offer the chance to pre-order your meal days before the flight is set to depart. This flight, however, didn’t provide much ahead of time. I had the standard option of selecting “special meals” such as asian vegetarian or vegan meals, but didn’t have the option to pre-select standard meals that would be served onboard. Lufthansa does post menus on their website and has a section to search by flight. Oddly enough,  the menu that was provided onboard was different than what was posted online.

I was flying on a less popular flight route, so I wasn’t too surprised or disappointed in not being able to pre select meals.

I had a few hour layover in Frankfurt where I checked out the Lufthansa Business Class Lounge and more importantly the food spread. It wasn’t the best selection that I’ve seen, but the food was tasty enough. I didn’t fill up too much on the pre-flight meal, instead saving my appetite for the dining experience on board.

I boarded the 747, or the “queen of the skies”, and of was able to secure one of the coveted upper deck seats. 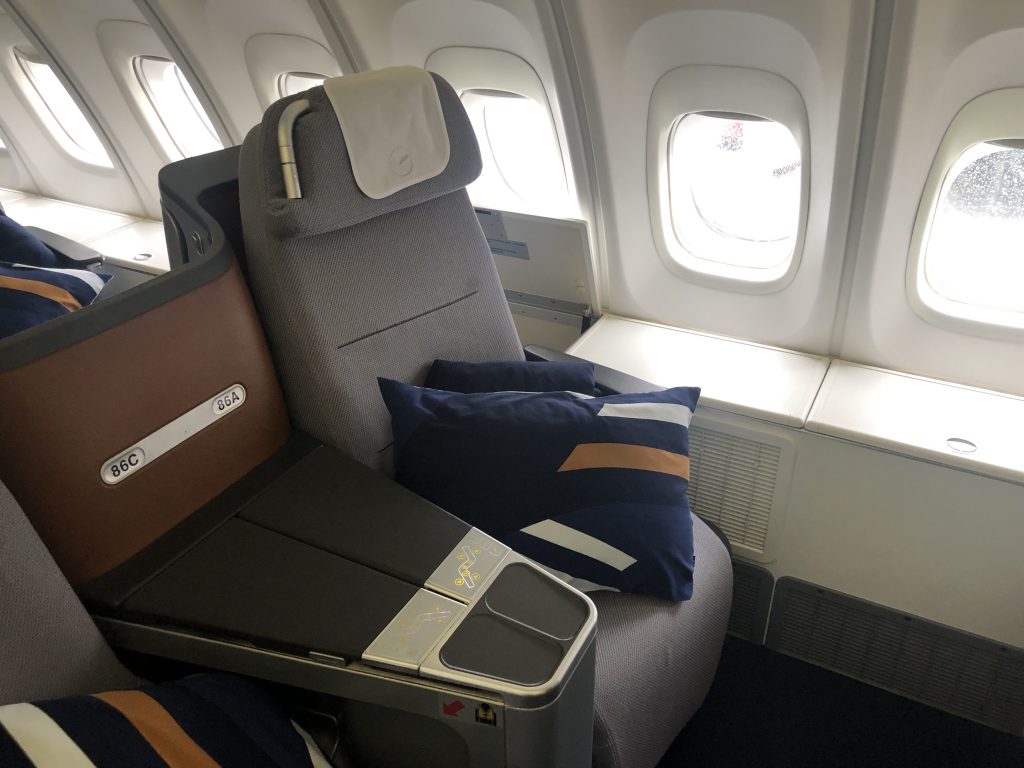 The cabin felt exclusive, with a limited number of seats, and they provided a ton of storage, especially in the window seats. Apparently there is no window storage on the lower deck, but I didn’t  get an opportunity to look at that cabin. As soon as I boarded we were whisked up the stairs and right to our seats. This really gave an exclusive feeling to the entire experience.

The upper deck was already intimate, and only seemed to be half full upon our departure. I settled in for a great flight. 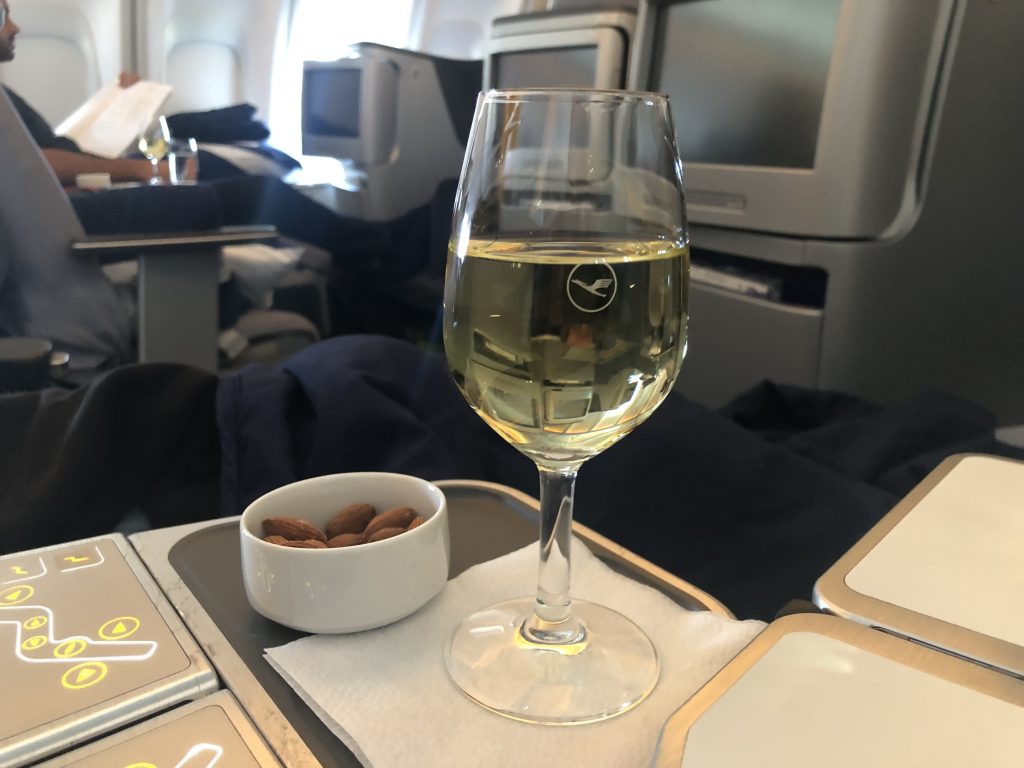 I started with pre-departure service of white wine and mixed almonds. Departing from Germany, I went with an authentic German selection, and so I choose the 2017 Saar Riesling, which retails for about $21 per bottle.

What immediately stood out to me was the branded wine glass. It was a very nice touch. Being a German carrier I knew the drinkware and dinnerware would be top class, and I wasn’t disappointed. 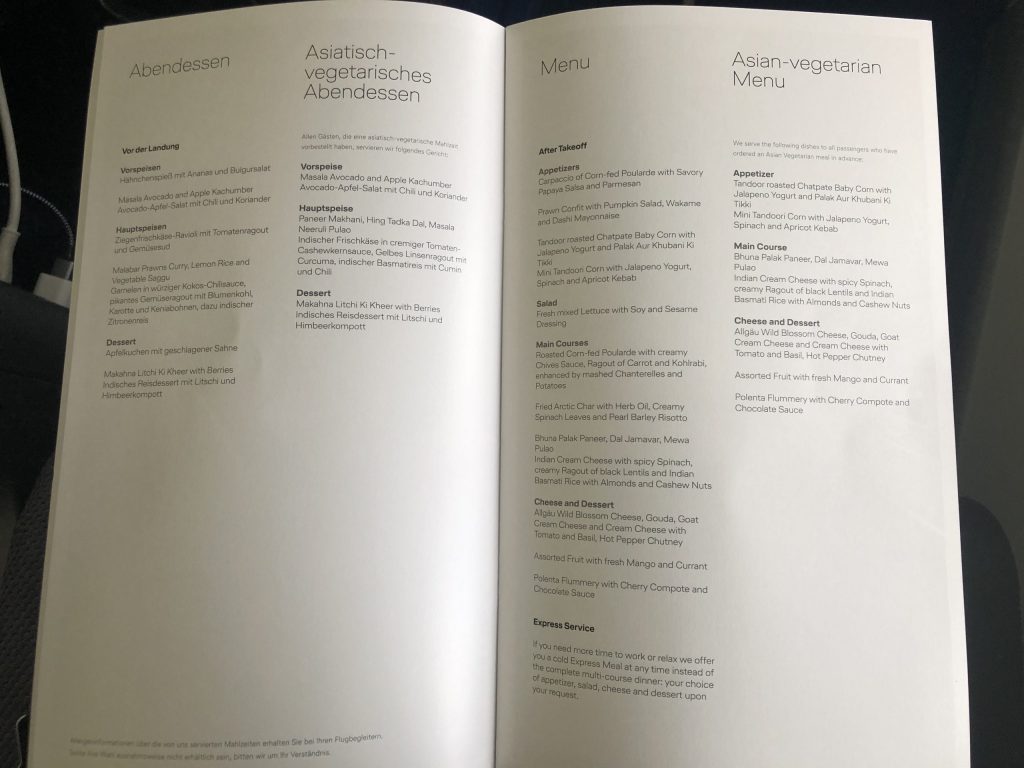 As we were taking off, I browsed through the menu and had a difficult time choosing my meal. I was en route to India, so of course I was craving Indian food. But that’s all I would be eating when I got there, so I reckoned I should try something else. Luckily Lufthansa made a compromise easy. Being a 9 hour flight, they actually provided 2 meals during the duration of the flight. So I could choose one western meal and one Indian meal. Perfect.

However, when it came time to pick my first appetizer I couldn’t resist the chatpate baby corn option. While it was originally supposed to only be provided for the Asian vegetarian menu, since the flight was only full they happily accommodated my request. 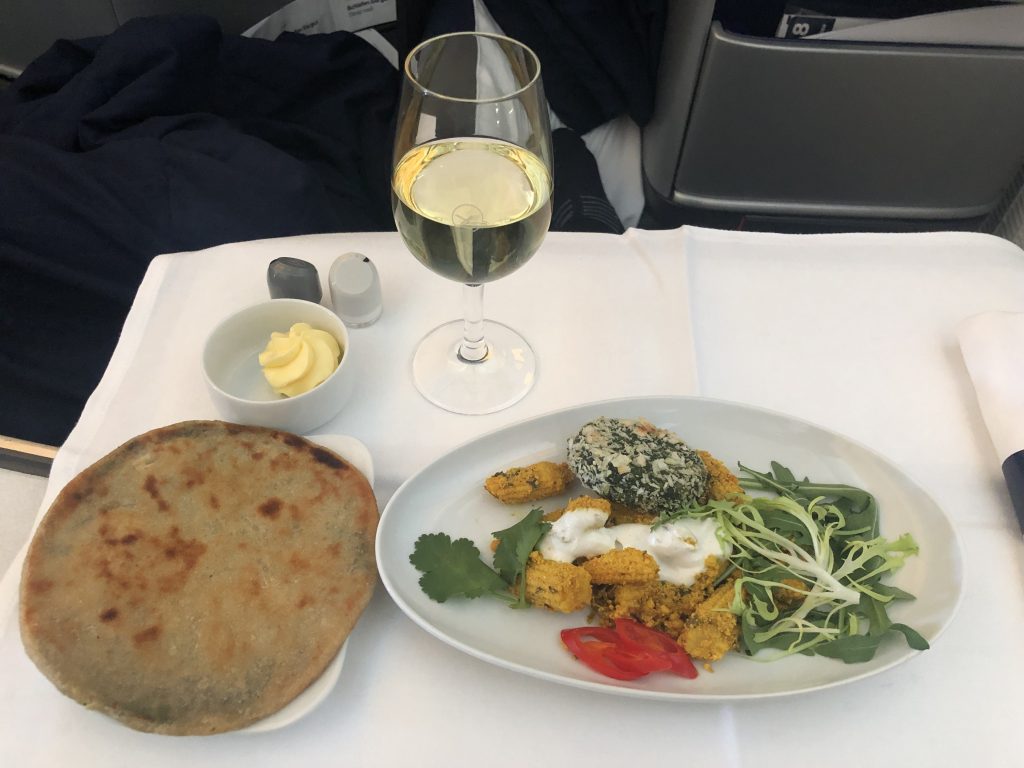 The appetizer was served with a side of Indian roti and was presented beautifully and tasted delicious. It was well seasoned with a little bit of heat, but was accompanied with yogurt that provide a cooling touch. This was one of the best appetizers I’ve ever had on a flight. After I poked around the menu in more detail, I quickly realized why.

The Indian food on Lufthansa is curated by Chef Vinod Saina, a master chef of the Leela Hotel Group. If you haven’t had the pleasure of staying in one of their resorts, the properties are a treat, and they have locations all over India.

After I settled in further, it was time for the main dish. 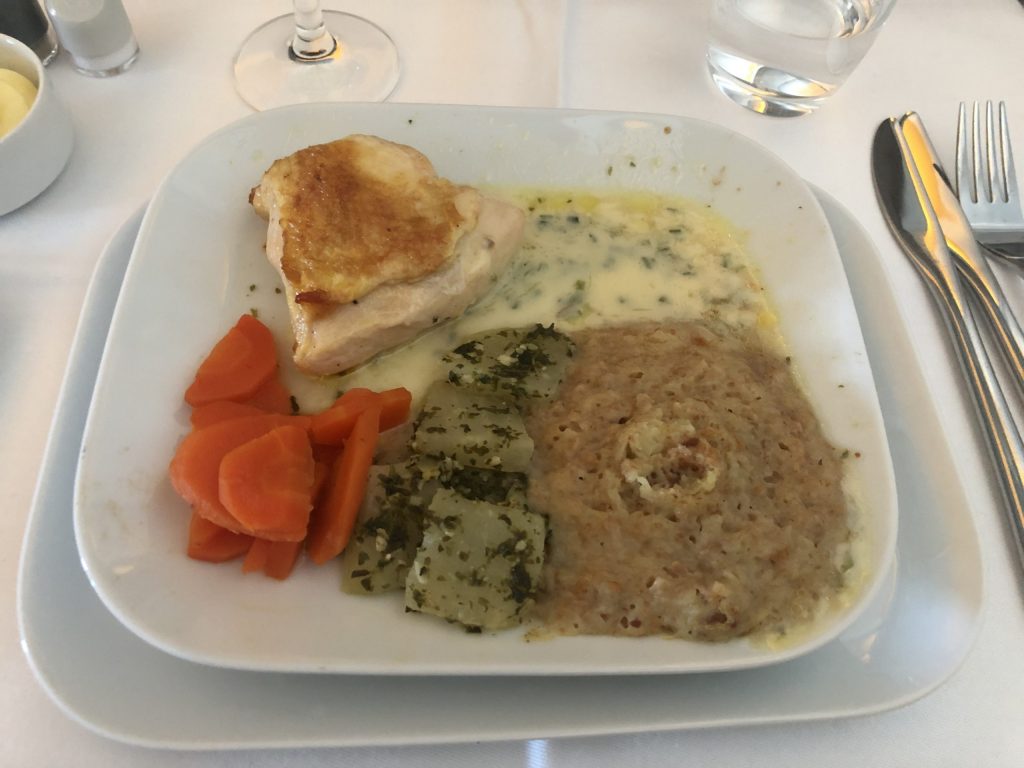 I ordered the Roasted Poularde with a carrot ragu and mashed chanterelles. Although it wasn’t the most appetizing to look at, it tasted decent enough. I enjoyed the poularde, and it was paired well with the creamy sauce.

It wasn’t the most exciting meal that I’ve eaten on a flight, but it still bested the options in economy. 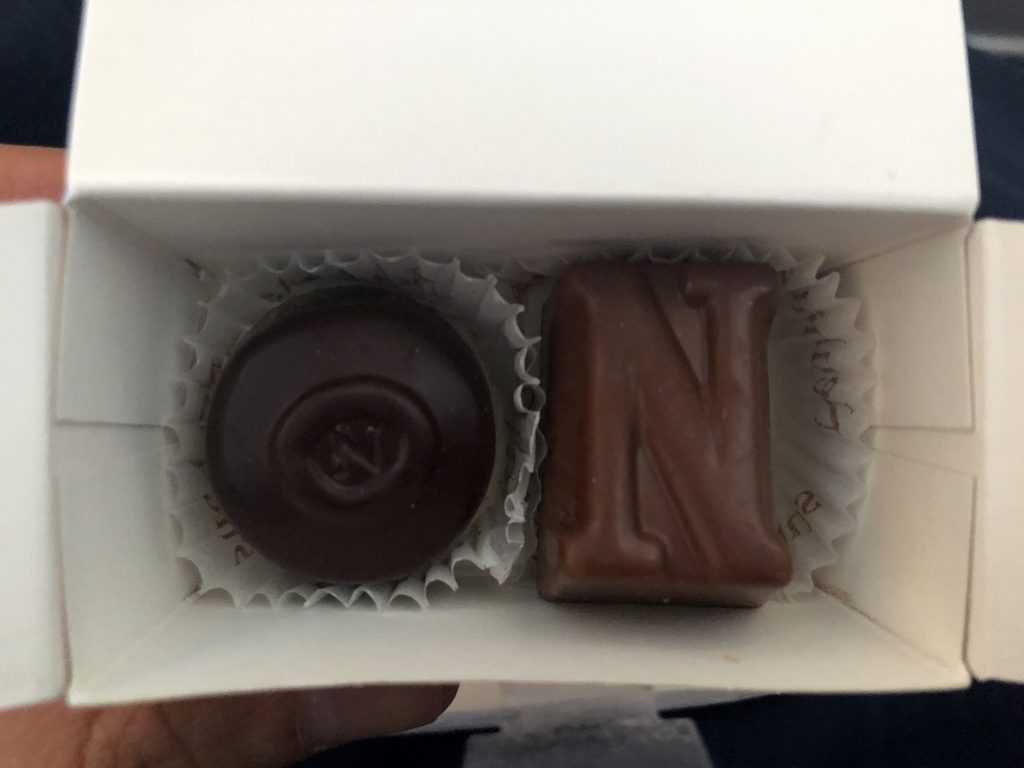 As I finished up my meal meal, I was stuffed. I passed on dessert menu, but still received two complimentary little chocolates that I gladly accepted. A rich and delicious palate cleanser.

While I caught a few hours of sleep, I woke up still exhausted but ready for my second meal. This was set to be the full Indian spread that I was eagerly waiting for. 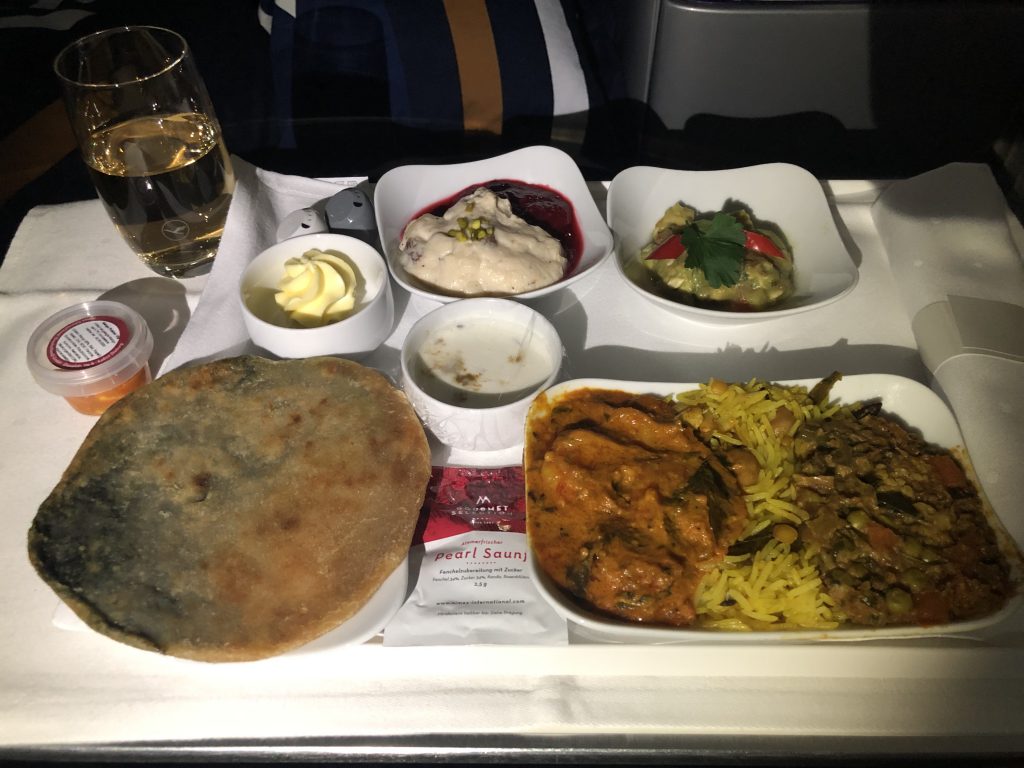 With the cabin still dark, I squinted to see a presentation of prawn curry, lemon rice, and vegetable saggu made with cauliflower, carrots, and beans. Again served with Indian roti, masala avocado, and a yogurt riata, as well as Kheer (an Indian rice dessert).

The food was very well flavored and not too spicy (although I really like spicy food). The masala avocado was a great starter and combined nicely with the roti to make a truly great dish. I didn’t care too much for the dessert option, but maybe that’s just me. Rice deserts were never my thing.

This meal was easily much better in flavor and presentation than the first one.  Thinking back, I should have gone for Indian for both meals.

As we were approaching our landing it was already 2am local time, so I figured my sleep for the night was already shot and decided to order an espresso. 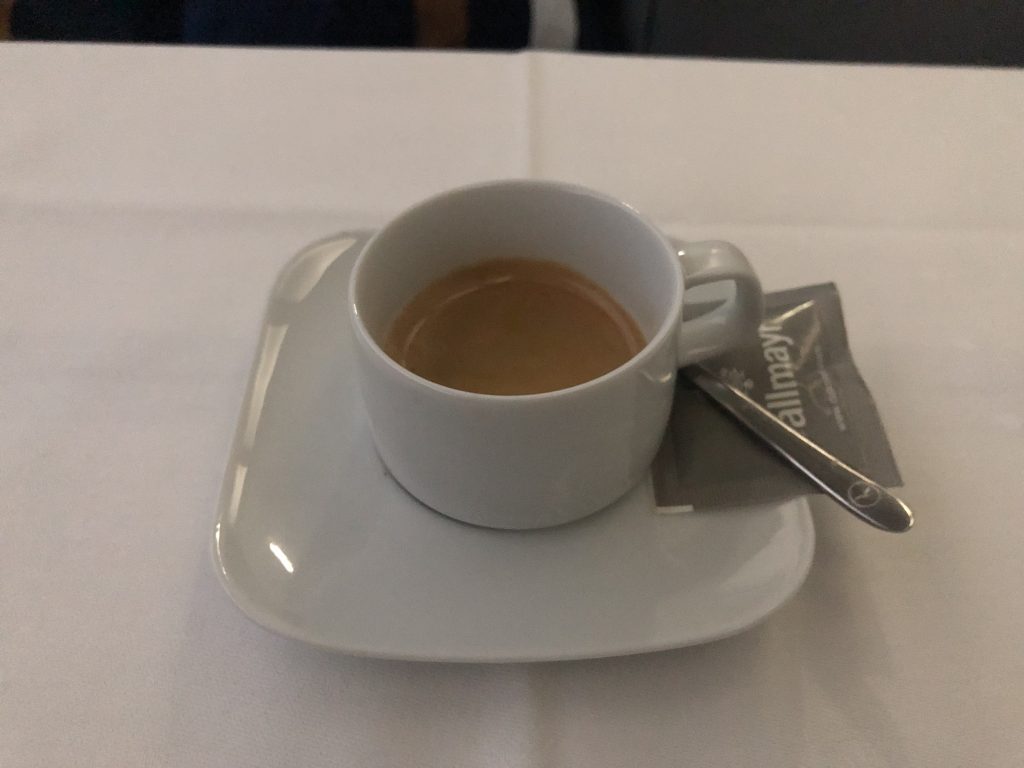 I’ve noticed that many US carriers don’t serve espresso, even on business class flights, so it was nice that Lufthansa has it available.

Usually coffee on airplanes is objectively awful, but the espresso on this flight was well made and had plenty of cream.

I found that the Lufthansa business class food was excellent, and the service was also on point. I would highly recommend getting the specialized menu anywhere you fly. Next time that’s all I’ll be ordering, regardless of my destination.