I recently took a trip to Paris over the winter and planned a week long trip to conclude on Christmas Day.

I had flown into Charles De Gaulle over 8 times for layovers and never actually been to Paris city center. Being the most visited city in the world, I had to check it out.

I didn’t really know what to expect flying out on Christmas day. I’ve heard horror stories about traveling around Thanksgiving time and I was afraid Christmas could be just as bad.

But instead of a headache, I was able to score a last minute surprise.

Maybe it was the holiday spirit but after a friendly chat with my check in agent she smiled and handed me an upgraded boarding pass to Delta One. I had heard that the Delta A330 business class was incredible, and I knew that it had lay flat seats and I immediately got excited while passing through security.

I’ve flown Delta One in the past on a 767 from LAX to JFK and an A330 from Tel Aviv to JFK, so I sort of knew what to expect. Top notch service, tasty food, and a comfortable bed to get me over the Atlantic.

Airlines have recently become infamous for their frustrating cost cutting methods, with the in flight meals usually hit the hardest. On most flights I’ve been on, I could expect an extremely tiny complimentary bag of pretzels or nuts. In economy you get the privilege to pay out the nose for a candy bar or beverage. And while had always associated planes with bland food and limited, I’ve experienced first hand how well Delta was approaching their meal service. Even though I had just spent a week in the culinary capital of the world, I was excited to dig in.

Since the flight was a last minute upgrade, I didn’t have an opportunity to take advantage of Delta’s program that allows you to order meals in advance. Their menu features seasonal dishes designed by well-regarded Chef’s, and I was afraid of them running out of select menu items. Oh well.

I settled in and enjoyed a small complimentary snack before closing my eyes. Before I knew it, I was gently awakened by a flight attendant who set down a tray with an assortment of small dishes. 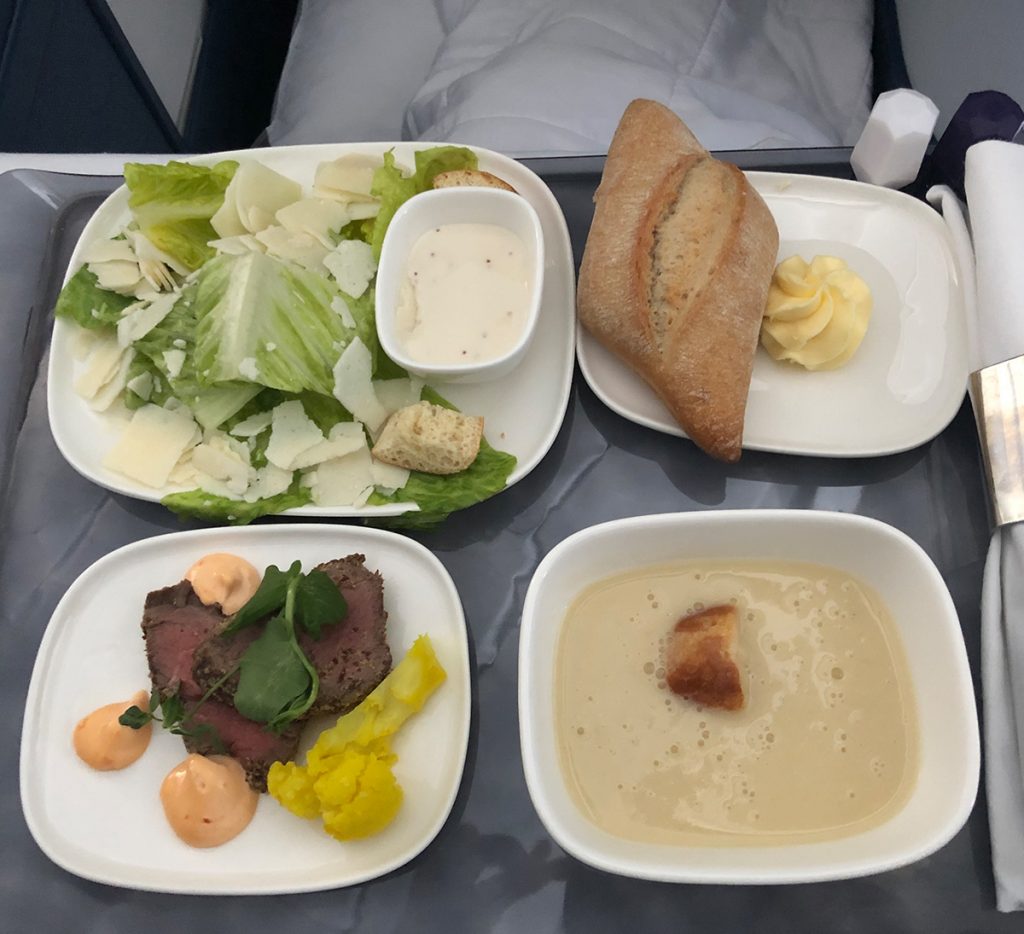 The presentation was solid, and each dish looked appealing. Before even digging in, I could tell that this Delta A330 business class food was going to be tasty.

I started with the Caesar salad, and while the lettuce was fresh and crisp, the dressing was unspectacular. The generous parmesan shavings atop the romaine helped add a needed level of flavor. The bread crumbs were somewhat stale, but enjoyable when combined with the other ingredients. Although the salad was satisfying, it was akin to the level that you might expect at a grab-and-go spot, or prepackaged at an airport restaurant.

To cleanse my pallet, I moved onto the cauliflower soup. It had clearly been reheated and was served lukewarm, but it tasted delicious. It was light and airy, with a subtle but pleasant, creamy aftertaste. I inhaled the soup pretty quickly, using the bread to sop up each drop from the bottom of the bowl.

Lastly, I started on the final plate of appetizers. A beef dish, served unheated, with a side of steamed cauliflower. The slice of beef was seasoned heavily, but it worked. There was a pepper rub on the edges of the cut that added an intense burst of flavor. The dollops of chipotle aioli on the sides added a welcomed element of decedent heat to the dish. I was even a fan of the cauliflower, an unimaginatively steamed side dish that helped break up the richness of the beef and sauce.

I was seriously impressed. While the food wasn’t exactly 5 star, it was sort of restaurant quality. It massively exceeded my expectations. It was tasty, interestingly crafted, and had a flavor profile that ticked off a lot of boxes. It would have been a perfectly delightful meal, until I realized that it was simply an appetizer… 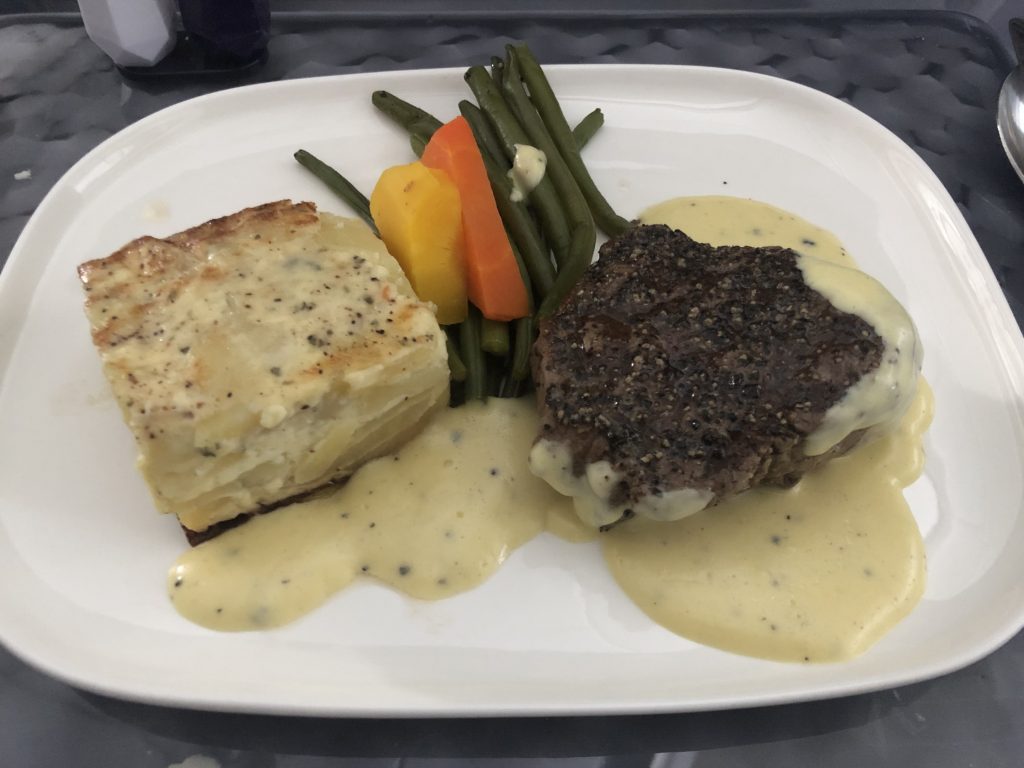 After a glass of wine and a quick trip to the loo, I was promptly served the entree. A cut of sirloin served with a bernaise sauce, some assorted veggies, and a heaping side of potato au gratin.

The veggies were a bit forgettable. While they were fresh and it was nice to have some greens on the plate, they were steamed with very little imagination or creativity. They were served cold, but I didn’t mind as I mostly skipped over them.

The beef was also served at room temperature, but burst with flavor. The piece was juicy without being fatty, and paired well with the sauce which added a creamy and decadent finisher for each bite.

The potato dish was also lukewarm, but good. It must have been sitting out since it was somewhat soggy, a disappointing yet unsurprising development that didn’t diminish my over all enjoyment.

The entire meal was well put together and tasty with a few hiccups here and there. Usually a dinner of potatoes and beef and heavy sauce could put someone in a food coma, but the tidy portions made for a satisfying and comfortable dining experience. Overall the food on the Delta A330 business class flight was well prepared with impressive flavors, and it was a real treat to experience interesting, well thought out dishes while in the air.

*Stay updated with our travel section!